Book Spotlight: Desires of an Independent Woman by L.K. Below 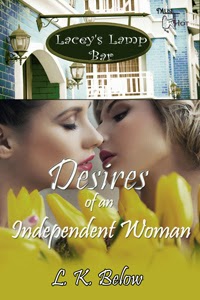 A flapper is more than glad rags and short hair. It's a lifestyle, and Cynthia Hart has dreamed of becoming one of the glamorous ladies of the night. With her bluenose parents, her dreams seem destined to rot—until she steps into Lacey's Lamp and meets Therese. Therese promises to fulfill every last one of Cynthia's desires—if Cynthia agrees to be her mistress.

Cynthia stumbled blindly down the paved sidewalk, reeling like she was fried to the hat. Right now, she longed for a tumbler or two of giggle water. If she could only find a speakeasy, she would drink until the tension in her stomach melted away. But bootlegs weren't sold on street corners--and even if she could find a juice joint, it wouldn't be open. The sun still shone in the sky, after all.

How was she supposed to go home? Every time she glanced over her shoulder, she saw Jared, kneeling as he asked her to marry him. Even though she was miles away by now, she still had trouble breathing. And her parents had acted like he was a sheik! Cyn had tried time and again to convince them that Jared was all wet, but did they listen? No. Ma said she'd be goofy for him before too long. Cynthia had other ideas.
“I'm twenty years old,” she mumbled. “I can say no. This isn't the Dark Ages.”

Under no circumstances could she go back and accept the handcuff Jared offered. And give up her dreams of being a flapper? Baloney. Even if she felt guilty for high-hatting him by running out, she couldn't marry him. Never.

Then what was she supposed to do?

Her feet felt so swollen she was sure they would bust open her shoes. As she reached down to massage one of her ankles, she pitched forward, nearly landing on her face on the pavement. She caught herself just in time with a curse.

Her palms stung, her feet howled with every step in her pinching shoes, and she was God-only-knew how far from home. She needed to sit down a moment, but out on the walk wasn't the place to do it. As she glanced up, she noticed a sign. Lacey's Lamp. Was it a trinket store? The windows out front were shadowed, so she couldn't see in. Whatever it was, maybe the owner could spare her a sip or two of water. Bracing herself, Cynthia opened the door and let herself in.

After a minute, her eyes adjusted to the interior. It looked like she was in a bar--but they had all been shut down with the Prohibition, hadn't they? She scanned the empty interior, finally settling on the counter, where two women were talking.

A woman, manning a speakeasy? Hiding her curiosity, Cynthia approached.

Her gaze was riveted to the woman behind the counter. Her long, red hair shone in counterpoint to her vivid violet eyes. Cyn had never met anyone with eyes quite that color. As she groped for a bar stool to sit, she wondered what she was supposed to say. Should she order a drink?

After a moment of hesitation, she asked, “This a gin mill?”

Raising an eyebrow of the same boisterous color as her hair, the unfashionably curvy woman countered, “Do you ask on behalf of the police?”

Cynthia recoiled at the accusation. “Horse-feathers, no! I came looking for an edge.”

“That isn't all you desire.”