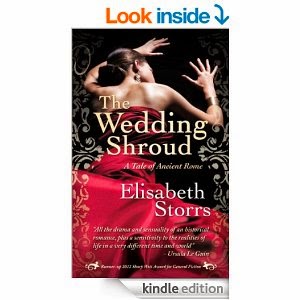 ‘All the drama and sensuality expected of an historical romance, plus a sensitivity to the realities of life in a very different time and world…’ Ursula Le Guin

In 406 BC, to seal a tenuous truce, the young Roman Caecilia is wedded to Vel Mastarna, an Etruscan nobleman from the city of Veii. The fledgling Republic lies only twelve miles across the Tiber from its neighbour, but the cities are from opposing worlds so different are their customs and beliefs. Leaving behind a righteous Rome, Caecilia is determined to remain true to Roman virtues while living among the sinful Etruscans. Instead she finds herself tempted by a hedonistic culture which offers pleasure and independence to women as well as an ancient religion that gives her a chance to delay her destiny. Yet Mastarna and his people also hold dark secrets and, as war looms, Caecilia discovers that Fate is not so easy to control and that she must finally choose where her allegiance lies.

Exploring themes of sexuality, destiny versus self-determination and tolerance versus prejudice, The Wedding Shroud is historical fiction at its best which vividly brings Ancient Rome and Etruria to life while accenting the lives of women in ancient history.

The Wedding Shroud was judged runner-up in the 2012 Sharp Writ Book Awards for general fiction. Elisabeth's next book, The Golden Dice, will be released in July 2013.

PURCHASE HERE FOR ONLY 99 CENTS!
Posted by Cheryl at 3:43 PM