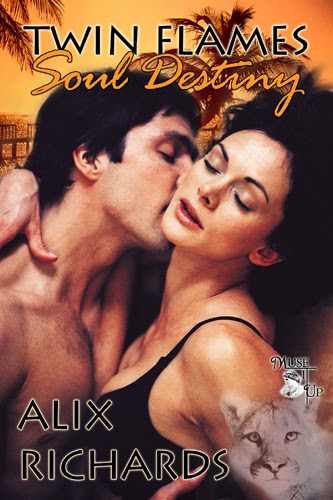 Joy Lyons-Morgan must face her deepest darkest fears in order to claim her full destiny at her flame-mate’s side. Will she? The acceptance of their kind is that everyone has good and bad within them, balanced; she has to face those elements within herself in order to stand at his side. Can she?

Jairo Silverthorne knows and accepts the dark within him. It’s part of who he is and always will be. He now has to wait and watch patiently while his divine match comes to terms with the same inside herself.

Most don’t realize the fears that lay inside, they are a part of us. Dictating how we see the world. Joy and Jairo are given an opportunity to face those terrors and embrace them.

The pay out? Their destined future.

Jairo laid back, propped up on the pillows. Joy sat at the foot looking at him. Part of him wanted to alleviate her fears and uncertainty concerning him, but what words could he use?

He motioned with his hand for her to come to him. He didn’t want her thinking he was forcing her to comply. The desire to have her curled against his side palpable, a comfort he’d been denied for too long as far as his hardened body thought.

She tugged her shoes off and scooted toward him. Mimicking his stance, he shook his head. Something told him it was wrong. That may have been the way friends relaxed next to each other, but they were more than friends.

Draping his arm across Joy’s shoulders, he tugged her to his side. She was stiff, as if she feared being close to him.

Her hesitant words brought an image to the surface.

They were in a similar room, seated together like now. Joy was tense then as well. He’d leaned toward her and took her lips in a gentle kiss, a gentleness he hadn’t known he was capable of until that moment.

He cleared his throat silently and with his fingers turned her face to him. Holding her chin lightly he gazed into her eyes, what he read there surprised him.

She wouldn’t press him. Even though she knew what they were to each other better than he did, Joy would remain apart from him.

Jairo held her captive as he lowered his mouth to hers. His heart pounded and his breath caught, this was what he wanted…what they both needed. With the same gentle ease he had in the vision, he caressed her lips. Her eyes remained on his as he drew the tip of his tongue along her lips. She tasted like heaven.

A small hitch in Joy’s breathing made him aware of the effect he had on her. Tiny tremors traveled through her body and echoed in his. He brought her closer to his hard frame. Her mouth opened. Encouraged, Jairo deepened the kiss.

Images flashed through his mind as her fingers dug into the front of his shirt.

Another time and place, Joy clenched him closer, her breathing a gasp as he caressed her exposed flesh. He thrust his tongue against hers as the pictures flooded his memory with emotions he hadn’t known he could feel for a woman.

A whimper penetrated his fierce arousal, and Jairo collared the sexually hungry beast. He released her mouth and laid his forehead against hers. Dragging in deep gulps of air, he closed his eyes.

She trembled as he did. Her hands still entangled in his shirt.

“I am—sorry.” He touched the strands of her hair that brushed his knuckles. “I did not mean to—”

“It’s okay.” The tips of Joy’s fingers touched his lips, her gaze locked to his. “We’ve always been this way with each other. It’s how you broke through my barriers. Intimacy is the one area of our relationship where we never struggled. Our one common ground where we’re both on equal standing.”

Her words flowed over him like a cascade of warm water. Soothing and erasing the misery he’d discovered the past day. Honestly, his entire life.

“This—intense?” Jairo curled his arm, bringing her even tighter to his side.

“Yes,” her word breathed out as more of a sigh than spoken.

Did she feel the same soothing sensations he did?

“Do you feel it?” He buried his nose in her hair as she rested her cheek under his chin.

No words described what traveled through him in that second. A relaxation unlike anything he’d dealt with recently. Joy belonged there, tucked under his arm, safe from the evils of the world around them.

Jairo knew in that moment he’d remember everything they had shared together. It didn’t matter if it took the rest of their lives, he’d recall each kiss and argument. And looked forward to those times when they’d make their presence known to him and then to her.

She had gotten lost in the remembrance of what flowed between them, like finding something lost for a long time. The joy, love, and memories they exchanged with his simple caress gave her hope for the future.

They would get through this. Because that was who they were, she closed her eyes.

A small part of Joy’s mind wanted things to progress further than where Jairo stopped. At the same time, she knew neither of them was ready. They had to work through whatever caused their disconnection and then move toward the physical side of their relationship.

Did she want to know what caused them to break apart?

She did, but an underlining fear of what would be exposed blurred at the edges of her mind. Was she prepared to face whatever came to light? She snuggled closer, enjoying the warmth and feel of his arms around her. She hadn’t realized how much she’d missed Jairo until he kissed and held her. The sense he gave off was he didn’t want to let her go…ever again.

That happened before… Faint images danced within her mind, the cabin, rain, and her suitcase. He’d held her then, too, so tight Joy wanted to forego leaving and stay with him. But she hadn’t, she left…and lost her memories in the process. Was that why she couldn’t remember her past life, because she wasn’t supposed to leave him? It had been in her gut to stay and forget about…she still couldn’t recall her reason for leaving…she hadn’t stayed though. She’d ignored what she sensed was right.

Her eyes moistened beneath her eyelids. The ghoulish nightmares hadn’t stopped until she started paying attention to her own senses. Had that been a lesson?


PURCHASE AT MUSEITUP PUBLISHING OR AMAZON!
Posted by Cheryl at 12:38 PM