Book Spotlight: The Care and Feeding of Sex Demons by Angela Fiddler Keeping a sex demon happy and sexually satisfied is always the safest option, even if Cy has his own relationship issues. When saving the world on a regular basis, a happy home is important, especially when mixing human, fae princes and a starving sex demon.

Purchase your copy at Loose ID

Discuss this book in our PUYB Virtual Book Club at Goodreads by clicking HERE!

When rotten fish and bile smell of the ambergris met… well, you know what sulfur smells like, the whole sky lit as fragrantly as it did brightly. Just like the old days. Evil came in different flavors but it all smelled badly. I was ready for whatever came out of that cloud. But the only threat was a different kind of bad smell. My agents replaced three quarters of the whale vomit with earwax at the source to cut costs. We didn’t know it would also save the world.

My boyfriend, Patrick, had insisted the bad guys would now the difference and that I was risking my life to make the switch, but the person picking up the ambergris from my agent hadn’t known what it was supposed to look or smell like either. I wasn’t even supposed to be here. My brilliant planning was supposed to have helped out my team, not me, personally.

After the sky fizzled out, the warlock had exploded in a billion, billion...billion? I had no idea. I wasn't a physicist, I was an apocalypse stopper. Calculating how many photons contained within whatever warlock the Internet coughed up this week wasn’t in my job description. No scientist would ever read my paperwork.

I was retired from active duty. I was only supposed to administrate the real apocalypse stoppers. I'd been out scouting for possible altar locations when the world-ending had started early. The exploded warlock had been as surprised as I was until he had been unmade.

And he took my company car with him.

When the apocalypse had started, my first thought had been oh, good.

Patrick was going to kill me.

The cow walking along side me looked as though nature has squared off her body. If cartoon physics were correct her cross-sections would look like T-bone steaks. The highway I walked beside stretched on ribbons, rolling over the endless hills in the high country. The cow had been following me for a while just on the other side of the barbed wire fence. Three hours of constant adrenaline had left my fine-reasoning skills somewhat stripped, but I was fairly sure it wasn’t a threat. It reached the end of the fenced in field and regurgitated some cud.

I wanted breakfast, too. My back hurt, my shins ached, and the dried mud on the legs of my suit added twenty pounds to each step. My boss had even forced me to wear dress shoes to the stupid meet-and-greet that had turned into a scream-and-run.

Another red car appeared in the distance, but I didn’t get my hopes up. Because the high powers above loved to mock my life choices, the last three cars that appeared in the past hour had all been small, two-seaters, and red.

It bobbed up and down on the ribbons. I had a blister on the back of my foot. I wanted to stop walking, but that would almost guarantee the car wasn’t Patrick’s.

On the last rise, the turn signals came on, and the car started slowing down. Patrick had a meeting with one of the major charm-makers in town. He’d been worried about it for weeks, but once the rogue warlock who was sourcing his hanged-man pancreas through craigslist had run out of his ambergris, the hell-fire had stopped. The warlock had brought a full truck’s worth of sulfur, but without enough of the catalyst ambergris, it fizzed out before summoning even a hell-puppy, forget a hell-beast. Exploding into subatomic particles was an easier death than having a summoned-but-not-contained denizen of hell munching on parts of you from a watching-your-own-death happen perspective.
We had a lot of specific terms in our business. We used a lot of dashes.

Patrick and I had been together for five years, and yet when I asked him if I had woken him up just before dawn before his biggest meeting of the year, he lied and told me he’d been awake the whole time. I wouldn’t have lied to him.

Patrick slowed down, but didn’t stop, so neither did I. He didn’t unroll the window until I couldn’t pretend my shoes weren’t hurting my feet which every step.

He drove on another couple feet and stopped, so I still had to limp to get in. He didn’t even wait for me to do up my seatbelt before he pulled the sports car into a U-turn. I’d been on a single lane highway, but the tiny car had no problem completing the circle on the road with its tiny wheel base.


The silence was worse than the million questions he had every right to ask me. He didn’t ask. I wanted to crack a window to let some of the tension out, but it wouldn’t actually affect the air pressure.

Neighborhoods surged beyond the city limits like massive muffin tops. Some groups subdivisions were love handles by now. Calgary needed a bigger edge to contain everything inside of it. “Have you eaten?” Patrick asked.

“I’ll grab something at the house.”

“I’m not dropping you off at the house. I have to be in at the university in twenty minutes. There’s a C-train station there.”

My feet were killing me. I just wanted to go home, and I’d bought the fucking car. I put my head against the back of the seat. “I’ll get a cab.”

Patrick exhaled, sharply. I hadn’t meant anything at all by wanting to hire a car to take me home.

“You promised me you were going to be in a supervisory position. In what role is the supervisor supposed to be involved in a standard apocalypse prevention attempt? You have minions. They should have singed eyebrows right now, not you.”

I reached up to touch my face. Mud flaked off. I would get the car detailed, but I didn’t really have the time, which meant Patrick would have to get it done for me, which meant he was cleaning up after my mess again. We’d just had that talk. So that meant he’d do it for me. I wondered if it had occurred to him not to answer the phone when I called. “It was just supposed to be a dry run. He just recited his incantations better than most. As far as we knew—"

“Do not sit there and tell me that you have a clue as to what your boss knows. It’s far more like Ms. Gwen to know it was supposed to be tonight all along than it is that this was all just a misunderstanding.”

Patrick swung into a fast-food restaurant parking lot. “You normally call your demon when you get into shit and you don’t want me to know about it. Was he not picking up?”
I flushed. August was my sex demon. He’d been given to me at the end of a successful job back when Patrick and I had two separate addresses. It had been after the house fire so technically I had an address, but no place to live.

Patrick had bright red hair. When I met him, his arms and legs had been too long for his body in a way that I found adorable. He moved with coils of energy. In the past five years he’d left his early twenties behind and he finished filling out all the way. Now everything looked in perfect proportion.

“I got you coffee,” Patrick said, motioning to the white coffee container in the two-cup holder. It hadn’t been sipped from either.” Alarm bells went off. “What, do you think I poisoned it?”

“No,” I said truthfully. But he would have had to do something to it, or he would have sipped on it on the way out of the city. Patrick hated mornings. He grabbed it and took a big swallow. “Happy?” 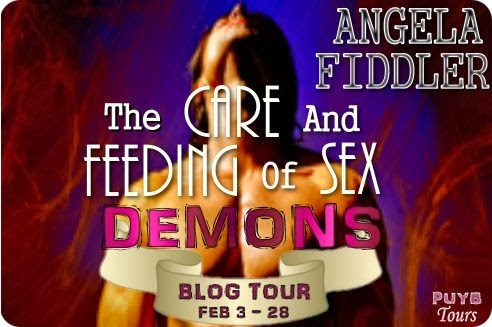