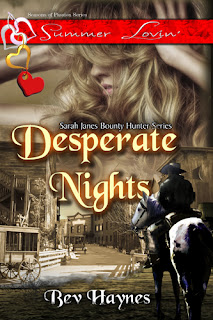 SARAH JANES didn’t intend to become a bounty hunter, but what is a girl to do when she’s lost her virginity to an outlaw, her youth and innocent outlook on life, and her parents love as well?

SARAH arrives in Cheyenne, Wyoming Territory filled with gritty determination to make a life for herself, one she can direct and guide of her own volition. She vows to never again run from anyone or any situation that is until she meets up with an outlaw that has money, power and status who wants Sarah, body and soul.

“Say, little Missy, why don’t you untie me and let me skedaddle out of here? You can’t go bringin’ me in, no-sur-ree. It just ain’t gonna look right.”

Sarah Janes rode ahead of the man on her tan Curly horse, Annabelle. As hard as she tried, she couldn’t block Pete’s continual blathering. She tied his hands behind his back and cinched up his feet good and tight, then tied the rope to her saddle horn so he couldn’t escape. Until they arrived in Cheyenne, he would be her only companion and an irritating one at that.

The sun glared in her eyes and she pulled her battered, dusty hat lower over her brows. It was summer and the sun hung in the sky. If she didn’t push on, they would have to stay out overnight and she certainly didn’t want to do that, not with this weasel-like character behind her. He surely would attempt to escape.

“Come on now, Missy, you can’t be serious. We’re nearly to Cheyenne.”

Sarah turned in her saddle and glared at the man. “Pete, shut the hell up. I’m tired of listening to you.” His hands were still secure, tied firmly behind his back. There was no way she was letting this scoundrel go.

“I said shut up! Do I have to shoot you to make it happen? You know, you bring the same money, dead or alive, so it doesn’t make a bit of difference to me, except you’ll be delightfully quiet if I kill you.”

Her words silenced Pete. Good thing because she’d do it, too. She’d never shot a man before, but this one was getting under her hide.

They rode along for another hour and finally, they neared their destination. The closer they rode to Cheyenne the more apprehensive she became. She was going to be in so much trouble with Walker. He’d told her in very firm words, no more bounty hunting or their wedding was off. Well, she couldn’t very well see this man sneaking out of town and not follow him. She knew it would be an easy capture because Pete was so blamed stupid.

“Only jack rabbits and lizards inhabit this bleak land,” Pete muttered behind her. “And you want me to die out here, Missy?”

Sarah again turned in her saddle and looked at him. He was a sorry excuse for a man. Fat. Dirty. Teeth rotten and black. “You didn’t have any qualms about killing that cattleman, now did you, Pete? Do you think he wanted to die out in the sagebrush? He had family and they put up a huge reward for you and I’m going to collect it.”

She could smell Cheyenne before she could see it. The reek of burning coal from the trains and the stench emanating from the thousands of cattle waiting to be transported made a lasting impression on the nostrils.

Pete began to squirm and buck in his saddle as they passed the McDaniel Theatre. Two buildings down the street sat the Sheriff’s Office, their final destination.

Sarah reined her horse and outlaw then called out, “Sheriff, I have a special delivery for you.”

Moments later, Sheriff Hackert poked his head out the door, and then stepped out onto the boardwalk. He was a wiry fellow dressed in dark pants, a red shirt and brown jacket.

“What are you up to now, Sarah?” He shook his head in dismay. “Suppose you have another desperado for me to lock up?”

Sarah jumped down from her horse. “Sure do, Sheriff. May I present Mister Pete Cloud to you? Come and get him. I’ve had a long ride and I want nothing better than a soaking bath and clean hair.”

She cringed. She didn’t need to turn around to tell who was calling her. “Well, well, if it isn’t Walker Andress. Why aren’t you out keeping the peace, Deputy?” Sarah heard his grunt of irritation and could feel the anger snapping off him as he stomped toward her. She knew better than to taunt him, but anger bubbled up her spine. Sarah wanted to live life her way, not be condemned to raising children and scrubbing floors.

She turned her head in his direction. The hollow sound of his boots hitting the boardwalk made her wince, but Lordy the swish of his gun against that muscled thigh settled like warm honey against her sexual core.

“I don’t have to ask where you’ve been for the last three days now, do I?” His light blue eyes filled with cold disgust and he pulled off his hat, running his fingers through the sweat dampened hair.

The man took her breath, not from his angry stance, but from his nearness. “Now, Walker, what would you have me do? I saw Pete heading out of town and I knew you wouldn’t be too angry with me when I brought him in. Just think what we can do with his bounty. I’ll finally get that barn out at the ranch and we can…”

PURCHASE AT MUSEITHOT PUBLISHING OR AMAZON!
Posted by Cheryl at 1:33 PM