I won a copy of this book during the Christmas in October event at Penny's Tales. 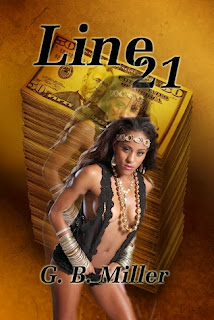 Playing the game of public sex is hard enough when you’ve got the family loan shark bothering you for a piece of your action, but when your symbiont wants a piece as well, it can make you question your own sanity.

Flat broke with no job, Jeannie was terrified of becoming just like one of her uncle’s deadbeat customers. Even though she was able to smooth-talk her way into a five-day extension of her loan, she was still stuck in the same dead-end with the same problem: no money. Still, God must’ve had an ulterior motive, because no sooner had she closed her phone, than a young man sat next to her and began talking. A few minutes later, Jeannie was holding a business card that could just be her potential salvation from a world of hurt.

After a brief, yet highly insulting conversation with her symbiont Aissa, Jeannie was determined to test her mettle as an adult performer. Not because she needed the money, but more to the point of proving her symbiont wrong as well as proving to herself that she could play the game of public sex and still keep her morals intact.


PURCHASE AT SOLSTICE PUBLISHING OR AMAZON!
Posted by Cheryl at 9:01 AM