Giveaway Hop Hosted by Under the Covers, runs August 14 – August 20

Love-struck: (adjective) having a passionate or overwhelming feeling of love; smitten

Is there a book or a series that you have read which has left you completely smitten? A hero/heroine that makes other heroes/heroines pale in comparison to the feelings you have for your “true” love? Are you left feeling dissatisfied because there is just nothing else that can compare?

We want to you share this special character or book/series with us and your followers. Tell us about them: share pictures, passages, quotes, excerpts, etc. Then offer that book as a giveaway to share the love. We all want the chance to be besotted, carried away, and/or charmed. So, introduce us to that special character that has left you love-struck.

The Studs 4 Hire series by Sherry James included the first two steamy, sexy books I read when I began blogging. Right away I was captured by this set of three women who decided they were sick and tired of being overlooked in the male-dominated business world. So, Sydnie, Riley, and Casey open up a firm where hot men help single women with repairs around the home. 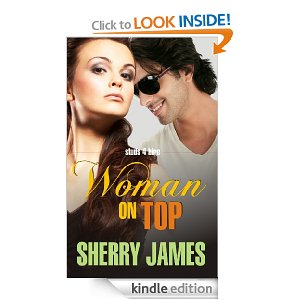 In the first book, Woman On Top, Sydnie is the main character, along with Trevor Vanden Bosch. Trevor got the promotion Sydnie deserved, so she's shocked to find him at the door of Studs 4 Hire looking for work. As the story unfolded, there were times I truly despised Trevor, but there were also so many times I hoped he would win Sydnie's heart. 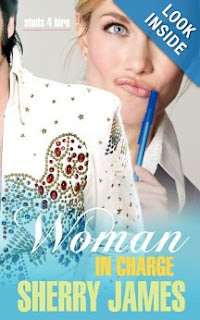 Casey is the main focus of the second book, Woman In Charge. She is contracted by a wealthy widow to redesign her mansion into a shrine fit for the King of Rock 'n' Roll. She hires Alex Roy to work with her on the project, a man who is still getting over a partnership that left him deep in debt and his heart in shreds. They decide to keep their relationship professional, but like Elvis says, they can't "helping falling in love."

Out of the two men in the Studs 4 Hire series, Alex is my favorite. He has plenty of reasons not to get involved with Casey, but he can't help himself. He has to learn to put his past behind him and move forward. So does Casey, whose past relationship history is filled with tons of rejection.

I read this series when it first came out (Book 1 in 2006 and Books 2 in 2007). The author has since re-released these two books by self-publishing them. Changing the series name from Studs for Hire to Studs 4 Hire, and giving them updated cover art. I'm hoping this means the third book in the series featuring Riley is on the way soon.

For the Lovestruck Giveaway Hop (International), I am giving away a Kindle version of Woman on Top and Woman in Charge, in addition to a $10 Amazon gift card. Please use the Rafflecopter form below for your chance to enter and win. Good luck!