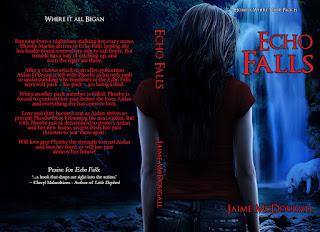 Running from a nightmare stalking her every move, Phoebe Martin arrives in Echo Falls hoping she has finally found a safe place to stop. But trouble has a way of catching up and soon the signs are there.

After a vicious attack in an alley, policeman Aidan O'Bryan is left with Phoebe as his only path to understanding why the Echo Falls werewolf pack - his pack - is being attacked. When another pack member is killed, Phoebe is forced to confront her past before she loses Aidan and everything she has come to love.

Love and duty become one as Aidan strives to prevent Phoebe from becoming the next victim. But with Phoebe just as determined to protect Aidan and her new home, secrets from her past threaten to tear them apart.

Will love give Phoebe the strength to trust Aidan and face her fears, or will her past destroy her future?


Inspired by the original cover art by Scarlett Rugers, the new cover embraces the feel of Echo Falls as a series. Jaimes says she's in such awe of the pure talent at Cohesion and she's so happy in taking these books to the next level!

To celebrate, she is holding a contest! You have the chance to win both Echo Falls (with the now-limited edition original cover) and the sequel, Fading Echoes – both signed! Already have the books? Then you can choose to have a minor character in the third book named after you or a friend. This contest is open internationally.

Tell her what scene in Echo Falls or Fading Echoes is your favourite and why. Haven’t read the books? Then all you need to do is tell her what paranormal creature you would be if you could and why.