Book Spotlight: The Fabric of Reality by Benjamin Kelly 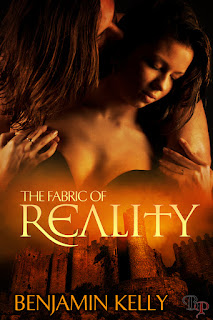 Can love bridge the expanse between parallel universes and save two souls from their brutal fate?

Alesia is one of the last surviving humans living on a post apocalyptic Earth where love is a commodity reserved for the elite and a common woman's only value is her ability to produce offspring. On the eve of her first forced union, she discovers a scientist named Gil on an Earth in another universe, but an impenetrable barrier stands between them.

A bloody, worldwide anti-technology rebellion wiped out the scientific community on Gil's Earth, leaving him trapped and under attack in an ancient fortress, an alternate version of one that exists on Alesia's Earth. With time running out, they need to learn the secrets of a fortress that allows communication between people in different universes to have any hope of survival. But the truth leads them to a choice: risk everything on a desperate gamble with little chance of success or spend their remaining moments together, longing to touch one another from the other side of reality.


PURCHASE AT BREATHLESS PRESS OR AMAZON!