Pre-order Forbidden Flame and get Forbidden Magic for FREE immediately with your purchase! Limited Time! 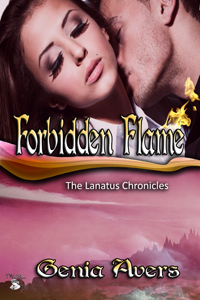 In the land of Dökkálfar, intimacy between elf and human is punishable by death. This stark reality is driven home when Jalakin travels to Gatsle and meets his first human, Lecala.

Worse, he discovers the real purpose of his assigned research: finding a way to help the last fertile female—Lecala—get pregnant.

Jalakin overcomes his bloodlust in order to work closely with the human, but his yearning evolves into something stronger. When she begs him for one night of joy, he is unable to deny his desire. The single coupling accomplishes the fertilization his sister’s artificial insemination project failed to achieve.

While Jalakin searches for a way to keep the baby’s parentage secret, Lecala barely survives an attack by an unknown assailant. Can Jalakin save his beloved from both the legal system and a faceless, murderous enemy?

Book Two in The Lanatus Chronicles by Genia Avers 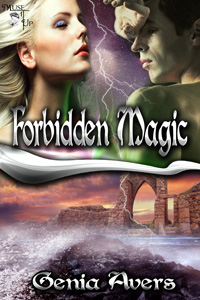 Subena’s people are dying. To obtain the crystals the álfar need to survive, she agrees to a treaty with the hated Gatslians. King Rothart has but one demand—she must wed his son, Prince Kamber. Subena vows the marriage will be in name only, but she is ill prepared for an attraction stronger than the ancient magic lying dormant in the land. Add to the chaotic mix a former suitor, a phantom lover, attempted murder, and an invasion by hostile troops, and Subena’s world isn’t what it used to be. Ancient skills might shield her body, but she possesses no power to protect her heart. Can she fight his former paramour and keep the seductress from laying claim to the man who’s made his imprint on Subena’s soul? Or is love as much of an illusion as a return to the planet Earth?

FORBIDDEN MAGIC is the first in a series of romantic adventures chronicling the intercultural challenges as Mydrias and Gastle attempt to resolve their differences and return to earth.