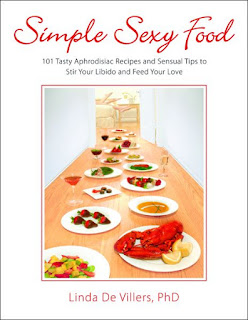 Do aphrodisiacs work? What exactly are they? How can I use them? We answer these questions and many more during the Simple Sexy Food virtual tour with clinical sex therapist and foodie – Linda De Villers, PhD. There are many ordinary foods that can have aphrodisiac effects – and we’re going to help you understand them.

Simple Sexy Food is an aphrodisiac cookbook like no other. Honest and direct, detailed and informative, it’s packed with exclusive recipes, food and sex tips, descriptions and histories of ingredients and even survey data about what food people find sexy. And it’s the only aphrodisiac cookbook written by a clinical sex therapist who also happens to be a foodie!

Linda De Viller, PhD, Clinical Sex Therapist and Foodie, shares her knowledge about the myths and truth about aphrodisiacs. She also shares over 80 recipes and a wealth of love and sex tips. Get your copy at - http://www.amazon.com/Simple-Sexy-Food-Linda-Villers/dp/097095655X/.

We can’t forget chocolate! Every Valentine’s Day, we are reminded of the huge aphrodisiac reputation of chocolate. especially for 21st century sensibilities (and my survey data), chocolate is the winner!

If there were a single food that meant “sexy,” it would have to be chocolate. no review of aphrodisiacs seems complete without an extensive detailing of chocolate’s mythical properties, tangled history, and incredible variety of forms. While we can’t devote the time or space to a detailed accounting of its influence, a brief summary, a little sip of its goodness, will be, like the food itself, just enough to leave us wanting more.

Certain facts about chocolate are unquestioned, but questions remain. it’s believed that the wild cocoa plant originated in what is now South America, likely in the Amazon or Orinoco basins. Archeological evidence suggests that the Maya brought it to the yucatan when they migrated there in the 7th century CE. Chocolate’s name is certainly Mayan in origin, from chocolatl, the name given to a cold, bitter drink they enjoyed, but the actual meaning of chocolatl is unclear.

Aztec emperor Moctezuma may have drunk 50 glasses of honey-sweetened chocolate a day to sustain his virility during his amouous activity with his harem of 600 women, but I don’t recommend either that much chocolate or that many part- ners! Share and enjoy in moderation!

The Spanish explorer Cortez almost certainly brought chocolate back to Europe, where from Spain it spread to Italy, Austria, and then France. In Europe it was at first something of a secret indulgence, and as its popularity grew, so did rules and restrictions on its consumption. And this may very well be explained by chocolate’s effect on both mood and libido, brought about by the release of endorphins, opiate- like neurotransmitters thought to mimic that falling-in-love feeling.

Chocolate’s early reputation was as a “food for the gods,” first for Mayan nobility, then Aztec nobility, then European nobility. It was also used as currency as late as 1850 in the Yucatan, and given that it had to be imported for European enjoyment, only the wealthy could afford it at first.

Thankfully, chocolate now enjoys a more widespread following, due in part to how versatile it is. it’s not coincidental that the one holiday devoted to love, Valentine’s Day, cannot be properly celebrated or appreciated without indulging in chocolate. it mixes well with a wide variety of foods, is consumed hot, warm or cold, in solid, powdered or liquid form. If we had to survive with just one aphrodisiac food, surely it would be chocolate!

Historically, chocolate has been valued as a tonic, as a medicine, and as a pow- erful aphrodisiac. It’s loaded with what are called the “feel good” neurotransmitters, releasing endorphins and boosting serotonin (mood stabilizers).

Chocolate is a stimulant that’s high in theobromine (0.5 to 2.7 percent), which is similar to but milder than caffeine, and caffeine itself (0.25 to 1.7 percent), which may be why it perks you up but without the jitters!

And then there’s anandamide, discovered in chocolate by San Diego researchers, which is similar to thC but not highly discussed because some chocolate manufacturers were concerned that chocolate would be labeled a drug! Anandamide is a cannabinoid, a chemical that hooks up to the same brain receptors that catch similar ingredients in marijuana smoke. Your brain produces some anandamide naturally, but you also get very small amounts of the chemical from chocolate. In addition, choco late contains two chemicals similar to anandamide, which slow the breakdown of the anandamide produced in your brain, intensifying its effects. Maybe that’s why eating chocolate makes you feel very mildly mellow. Not enough to get you hauled off to the hoosegow or bring in the Feds to confiscate your candy, just enough to wipe away the tears of lost love. (Don’t worry: you’d need to eat at least 25 pounds of chocolate at one time to achieve any marijuana-like effect.)

PEA, or phenylethylamine, is also in chocolate, and although this has been popularized as raising dopamine and also contributing to the “chocolate high,” it’s really only present in traces. PEA in excess dilates the blood vessels and can trigger headaches. It’s also rapidly broken down, and much higher levels are found in salami, pickled herring, and cheddar cheese.

The fat of chocolate—cocoa butter—is heart healthy because it is converted into a monosaturated fat by other fatty substances in chocolate. Chocolate also contains trace amounts of iron, magnesium, and copper. Milk chocolate has calcium, but also has more simple sugars and doesn’t have the antioxidant phenolics found in dark chocolate.

The fruits suggested are especially delectable served in this way, but you can add or substitute any other fruits and/or pieces of waffle cookies or pound cake that suit your taste. Use your imagination to cut your selections into sensually appealing shapes.

1. Arrange the fruit attractively on a large plate or place each type of fruit in a separate dish of a lazy Susan.
2. In a heavy medium saucepan, combine the cream and orange zest and bring to a simmer over medium heat.
3. Add the chocolate and 1 tablespoon of the Grand Marnier. Whisk until smooth. Remove the fondue sauce from heat and whisk in the remaining Grand Marnier.
4. Transfer the sauce to a fondue pot that is heated by a candle or canned-heat burner. Be sure to keep the heat low; too much heat will burn the chocolate.
5. Use fingers or long fondue forks to dip pieces of fruit into the warm chocolate sauce.

Simple Sexy Kitchen Tip: Strawberries are at their delicious best when in season. When they’re organic, you can gently clean them with a damp paper towel, dispensing with the need to thoroughly rinse them to remove pesticides, and water-logging them in the process.

Love Skills: You’re very likely to have plenty of leftover sauce . . . surely you can figure out something creative to do with it!

Simple Sexy Survey: Chocolate. Interestingly, younger people (age 18-25) were significantly more likely to select chocolate (73%) from a list of aphrodisiacs than any other age group. Less surprisingly, 73% of females chose chocolate as sexy food, far more than the males. 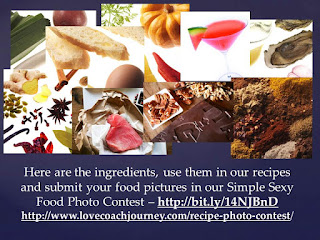 We invite you to participate in the Simple Sexy Food Recipe Photo Contest - http://www.lovecoachjourney.com/recipe-photo-contest - the grand prize winner will get a one on one aphrodisiac consultation and five runner ups will receive a digital copy of Love Skills by Linda De Villers. Details can be found at - http://www.lovecoachjourney.com/recipe-photo-contest/ . We supply the recipes, you prepare the aphrodisiac food and submit a picture of the finished recipe – for the contest. Contact nikki@nikkileigh.com with questions. We show the ingredients - now show us what you can do. 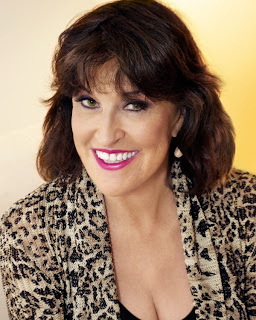 Linda De Villers has more than 20 years of experience as a sex and relationship expert. Dr. De Villers is regarded as an expert in the study of aphrodisiacs. She was a featured expert in a Discovery Channel Health program (2006) on 10 sexual myths, including the myth that aphrodisiacs don’t exist. In an academic setting, she has researched and presented on related topics.

I created this book to help you enjoy the remarkable relationship between food and sex. These two themes run brightly through my own life both personally and professionally, and are inseparable from my sense of who I am. Having counseled and taught thousands of people on the loving arts, and having fed nearly as many in my kitchens over the years, I find myself in a state of barely contained excitement over the opportunity to share what I know with you. I am the only author in this field to be credentialed in both sexual health and food, having worked and presented internationally and conducted research on the joint topic over the course of my career.