Book Spotlight: A Warrior for the Moon by Dana Littlejohn 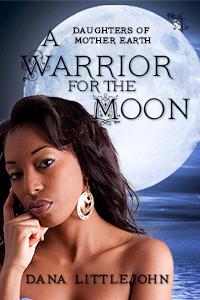 Rubani, the God of War, leads the people of Buganda in an assault to protect their land against the Zincka. During the campaign, he receives valuable advice from the goddess of the moon that leads to his victory. Rubani becomes enchanted by her beauty and intellect. Is there a way to convince the goddess to be his, even though they only spoke once to each other?

Before her hand grazed lower, Jasiri blinked his eyes and his shirt disappeared. Her hand glided across his bare chest. Dunia gasped softly, giggled, and then continued to explore his torso, purposely teasing his nipples as she did. Her long fingernails circled both until the centers of his flat bronzed discs stiffened, hard like pebbles. Jasiri moaned. Their eyes met briefly before he took her hand away from its task and kissed it.

“Indeed it has, beautiful Dunia. Have you forgotten me in our time apart?” he teased.

“Oh, no, Jasiri. It has not been that long,” she answered with a laugh.

“Perhaps after tonight I will be blessed with your attendance more often.”

“That would depend on why you seek to see me now, Jasiri.”

Jasiri spun her so she faced away from him then pulled her body into his.

“Do not presume to know me so well, beautiful Dunia. Maybe I just wanted to be in the company of one as lovely as you.”

“So I am wrong, Jasiri? You have called upon me for companionship only this evening?” she asked with a chuckle.

Jasiri muffled his laughter as he wrapped his arms around her slender waist.

“That is indeed my intent although I must confess to another motive as well.”

“A favor?” she asked removing his hands from around her. “What would the Supreme God of Buganda need from Mother Earth that he could not do for himself?” she asked over her shoulder.

He brushed his lips just beneath her ear and spoke softly. “That which I have to ask is something only you can do my beautiful goddess.”

“Hmm, I am curious to know what that is, Jasiri. Ask your favor.”

Jasiri kissed her shoulder. “My brother has fallen for your daughter, the Goddess of the Moon. Not only has he done me a great service, but he is my brother and I would like to see him happy.” He placed another peck on her ear. “He thinks she can do that. Can you convince Luneria to take him for her husband?”

Dunia pushed herself out of his embrace and turned on him. Her playful smile vanished.

“No, Jasiri, I cannot. I do not dictate who will be the mates of my children. They choose their own lovers, whoever pleases them whether he is a human or a god.”

“I was under the impression that it was prophesied by you, before the goddess of the sun was even born, who her mate would be.”

“You are well informed, Jasiri. However, Solarion was destined to be hers at birth. Takasa had to make the final decision to accept him. I must give Luneria the same choice.”

“Now, wait, wait, wait. I’m not asking you to do that.” Jasiri pulled her back into his arms.

”I’m not asking you to choose Rubani for her, but surely you can sway the odds in his favor somehow.”

“Jasiri, you are asking me to interfere with my children’s lives in ways that I promised I wouldn’t. They must be in charge of whom they spend eternity with,” she forced out, trying to catch her breath as Jasiri continued his trail of tender kisses.

Although Dunia protested his words, Jasiri recognized that his actions were welcomed. Talking became difficult as she began to enjoy his kisses more and more.

“Darling Dunia, I understand your plight and would never ask you to do something you have agreed not to do. But, my sweet, are you telling me you cannot do anything to help my brother at all?”

He pressed his body to hers so she could feel his passion rising for her. He slid his hands over her luscious body as he breathed his words against her ear.

“Surely you, her wise and beautiful mother, can influence her decision just a little. My brother is worthy of your daughter and he would make her happy.”

His butterfly kisses on her neck and shoulders seemed to help persuade her of his words.

“Well, I could speak with her and tell her how wonderful your brother is,” she said breathlessly. “But what will you do for me, my handsome Jasiri?”


PURCHASE AT MUSEITUP PUBLISHING OR AMAZON!
Posted by Cheryl at 9:49 PM