Book Spotlight: The Wait for Red Roses by Larion Wills 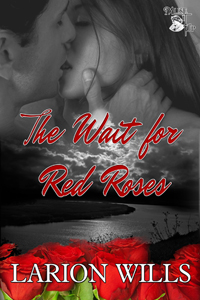 Imposter Curt would convince Cindra he was her husband long enough to turn the tables on the man paying him to fool her and gain even more.

Cindra knew the instant she saw Curt she still wanted him no matter what he’d done. Follow Cindra’s struggles to salvage the life she’d made for herself, not let him back into her life or heart, not to trust or succumb to the charms of a man changed too much, and to stay alive while she learns why Curt left her, and why he disappeared.

Curt sat on the side of the bed with an icepack on his crotch, not real happy with Bolwin. What Bolwin had to say didn’t make him any happier.

“I told you the class of woman she is,” he said in a bored tone.

“You also said I could use the input I’d get from her to convince the family.”

“That was not exactly what I said. I said she would be a good proving ground.”

Curt snorted. “You better hope they don’t know him as well as she does. She suspects I’m not Curtis.”

“I didn’t do anything. She said I look different. Wonder why?”

“She also picked up on the left-handedness almost immediately. Whether she bought the excuse or not, I don’t know.”

“Perhaps you shouldn’t be around her any more than necessary now. If she figures out what we’re up to, she’ll demand some kind of compensation for cooperating.”

“Aren’t you forgetting something? I haven’t gotten her to sign those papers, yet.”

“Have you even told her they were never divorced?”

“No.” He wasn’t about to tell her what he was there for. She’d kick his ass out before he could put his own plans into action.

“It might be better if I handle things now. We do know she has no intention of accepting him back. I’ll draw up the new papers and take them to that shop of hers.”

“Whether you like it or not, I can’t stay away from her. If I back off now, with her suspecting me, she’s very likely to go to them with her suspicions. As for the divorce, I wouldn’t advise you going to her, either. Just a little too much to do with his family, and she doesn’t feel too kindly toward them.”

He hoped she didn’t. He hoped he shifted enough of the blame for Curtis’ obnoxious behavior onto the old man to ease some of her anger at Curtis.

“You better not be getting any ideas of your own, John. If you fuck this up for me, I guarantee you’ll pay for it.”

“I’ll keep that in mind,” he said and disconnected. He had a lot of ideas of his own. Figuring out how to put any of them into effect was the problem.

Before Bolwin could dial back, Curt dialed another number. “Cooled off enough to talk to me?”

“No,” Cindra answered and hung up.

He turned the cell phone off to avoid anymore calls from Bolwin and eased himself back on the bed, unzipping his pants as he moved. The motel phone rang before he could get settled. Cindra didn’t give him time to even say hello.

“What kind of court thing?”

“Thought you didn’t want to talk to me.”

She hung up. He called her back. Not giving her a chance to even say hello and making things up as he went along, he told her, “They can attempt to break the trust. One way would be to prove I’m not competent to take control.”

“Since you haven’t had anything to do with the company for eight years, that shouldn’t be hard to do.”

“Incompetent, not inexperienced, and once I sobered up, I started studying finance. I’ll have a year to prove myself before they can even start anything.”

“You never told me any of that because?”

“I didn’t want you to worry about it.”

“You’re so considerate,” she drawled nastily.

“I said I didn’t handle it right.”

“So why are you telling me now?”

“First, so you’d know why I acted like such an ass, and second,” he took a deep breath and rushed out the next words, “as my wife you?”

Mentally holding his breath, he told her, “Wife. We were never divorced.”

“I signed all those nice papers your lawyer brought me.”

“I didn’t. They were never filed.” Dead silence came from the other end of the line. “Cin?”

“We are not divorced?” she asked in a whisper.

“I never signed them.” Partial truth, partial lie, Curtis disappeared before the lawyer could ever give them to him, something the family never knew until the old family retainer died. When Bolwin took over, he’d found the unsigned papers. “They weren’t my idea, Cin. That was the old man’s doing. I planned on coming back for you once I got settled somewhere.” He added meekness to his voice. “Things never worked out right until now.”

“You’d have been a bigamist,” he quipped before saying seriously, “I hoped you never got involved with someone else for the same reason I haven’t.”

“You knew you weren’t divorced,” she retorted. “I didn’t.”

“I never stopped loving you, Cin.”


PURCHASE AT MUSEITUP PUBLISHING OR AMAZON!
Posted by Cheryl at 9:54 PM