Free for Kindle: The Ghost Hunter by Lori Brighton 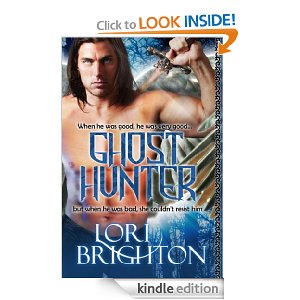 The second book in the Hunter series.


When Ashley Hunter inherits the Inn where her father mysteriously vanished years ago, she jumps at the chance to finally uncover the truth about his disappearance. But soon after taking ownership of the decrepit building, Ashley realizes she’s in for far more than she bargained. Not only has she inherited answers to many sought-after questions, she’s also inherited spirits, demons and even fallen angels! Then Cristian arrives, a gorgeous man who insists he merely needs a room to rent. She believes him, until one by one her ghosts start disappearing...

As a fallen angel destined for a life of servitude, Cristian Lucius is relegated to protecting earth from unwanted spirits. But he can’t accomplish this daunting task alone. He requires assistance from the very woman who frustrates him as much as she intrigues him. Cristian is determined to ignore his intense attraction for Ashley, and focus on his mission. If they don’t work together, they won’t have a chance in hell of defeating the demon threatening their lives. The problem is getting Ashley to trust him. No easy task, considering Cristian is the very man responsible for her father’s disappearance.

Intended for ages 18 and over.

PURCHASE AT AMAZON!
Posted by Cheryl at 12:03 PM