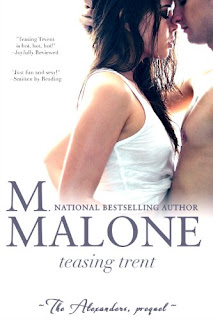 TEASING TRENT Prequel to One More Day - The Alexanders, Book 1

One girl. One guy. One unforgettable night.

The only thing Trent's best friend has ever asked of him is to keep an eye on his twin sister while he's deployed. Keeping her company on her birthday shouldn't be too hard. He just has to remember the promise he made to himself in college to keep his hands off her.

Which is getting harder and harder by the day.

Ever since Mara walked into her brother's dorm room freshman year and came face to face with a shirtless Trent, she's known he was The One. He's been right there with her twin brother as her biggest supporter or shoulder to cry on, whichever she needs most. The problem?

Trent has no idea how she feels.

Well, it's her first birthday without her twin and Trent's coming over to keep her company. It's the perfect time to tease him a little. A skimpy yoga outfit and a few glasses of wine later, she plans to finally have Trent exactly where she wants him. In her bed, for as long as she can keep him there.

If Mara has her way, she'll get a whole lot more for her birthday than a Hallmark card.