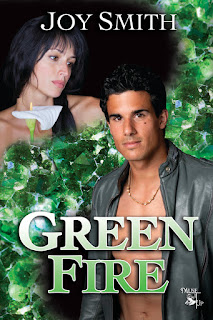 A gigolo must choose between his dream of wealth and privilege and the love he never thought he deserved.

Love forces Victor Novak to acknowledge the man beneath the phony façade he has worn since puberty.

Marisol Garcia has more on her mind than a fling with a handsome stranger.

The greed for emeralds is a nasty business. Morals are lax; people die. When Victor Novak, a past-his-prime “lady’s companion,” learns he has a brother, a corrupt security guard at a private mine in Bogotá, he seizes the opportunity to seek a more lucrative career in emeralds and flies to Colombia, South America for a visit. There, he falls in love with Marisol Garcia, a single mother and talented botanist struggling to raise a teenage son and save her family’s flower plantation from the man who murdered her father. When his brother talks him into partnering in a smuggling scheme involving Marisol’s prized lilies, Victor must choose between attaining his dream of wealth and privilege and the love he never thought he deserved.

Something evil and bright blasted through Victor’s eyelids. The blood moving through the veins in his head thundered like a rockslide. He attempted to wet his lips with his tongue, his mouth seemed stuffed with cotton. Insistent pressure in his gut made him aware of the need to relieve his bursting bladder. When he felt for another body in the bed, his hand dropped off the edge. He pried open his eyes, squinting against the glare streaming through the bare window.

Then it came back to him. The flower plantation. Guesthouse. A flash of memory: stumbling out onto the sidewalk and being poured into the back seat of Carlos’s Jeep. Victor felt for his clothes. He was naked—well, almost. He still wore his boxers, but someone had undressed him and tucked him in.

Pulling himself to a sitting position, he waited until the spinning in his head abated before glancing down. His expensive slacks were puddled on the floor. The wrinkles will set. Have to hang them up.

With a stretch, he picked up the pants and shook them out. Wait. Something is missing. He patted the back pocket for the lump of his wallet.

Victor checked the remaining pockets, turning them inside out to be sure. He tried to think, which was near impossible, given that little men beat their fists inside his head. My passport, my cash. Had the theft occurred here in this cottage while he slept? The door had no lock. Anyone could have come in—and murdered him, even. His body went rigid, and sweat broke out on his skin.

Leaping up, Victor raced to his suitcase and flung everything out of it until he gripped his traveling documents and the remaining money from his last job. Whew. All there except for his designer wallet—which was worth more than the cash inside it.

What had he expected? He came to Colombia knowing it was filled with crime. He had been foolish not to be wary of theft. To think he stupidly flaunted what little wealth he had.

He grabbed his airline ticket. He could change the flight and get out of Bogotá today, although the change fee would be horrendous. Flapping the ticket against his palm, he thought back to the previous night. His wallet must have been lifted at the bar—all total strangers, until yesterday, and all apparent members of the same gang. Victor was an intruder. Did they plan the theft to scare him off?

Thief or no thief, Carlos committed to take him to La Esmeralda. Trading emeralds wasn’t going to be a clean job, his instincts told him, but it would be fast money. What harm could come of hanging around long enough to give it a shot? He shoved the ticket back into its envelope, and then stashed it, along with his passport and the bulk of his cash, inside the inner lining of the pillow he’d slept on. With no maid service, it was as good a place as any for safekeeping.

Grabbing a shirt and a pair of jeans, he threw them on, slammed out the door, and strode to Carlos’s cottage, to the far left of the main house.

He banged on the red wooden door until his fists stung. “Wake up, you son of a bitch.” Victor bit back the coarse words. Cursing was for lowlife. This morning he couldn’t care what anyone here thought of him. He’d been burned, and Carlos was going to know it. “Come on. Open up.”

Rosario cracked open the door and peered out at him, wide-eyed and wearing a fluffy pink bathrobe. “Victor. What is the matter?”

Grabbing the knob, he tugged the door fully open and pushed past her into a sitting room dwarfed by a plasma TV set. “Where’s Carlos?”

Rosario stepped back, her hands in the air. “He is…”

Carlos appeared from another room. Considering the drinking they had done last night, he looked in better shape than Victor felt. “Eh, my brother. What is going on? You come busting in here…you okay, Rosario? You make my wife all upset.”

“Calm down? Someone removed my pants and tucked me into bed last night.” He glanced at Rosario, who remained cowering by the door. Certainly not her.

He stepped nose to nose with Carlos, his feet digging into the plush carpeting. “I expect you took care of me, and lifted my wallet as a reward.”

“You mean this one?” Carlos tossed over Victor’s billfold. “I found it on the sidewalk outside Luis’s place.”

Victor flipped through it. His charge cards and cash appeared intact. “I’ll bet you did.” Stuffing his wallet in his pocket, he turned to leave.

“Victor.” Carlos’s hand clutched at his shoulder. “I tell the truth.”

Victor heaved in a breath of resignation. He had his wallet back, and had already decided to stick it out here, so he might as well play along. Carlos’s sidewalk story was bullshit. Though somehow he couldn’t believe Carlos was low enough to steal from him, when he could have simply walked into Victor’s cottage and taken anything he wanted.

Maybe he needed to thank Carlos for retrieving his wallet from whoever lifted it. He might’ve missed a good fight. If only he could remember how it went down. Then he’d know for sure if Carlos was friend or foe.

Joy Smith turned from a successful career in non-fiction to the challenge of writing women’s fiction and found she loved weaving plots around interesting characters. Her romantic suspense, Green Fire, is her debut book. She has several other romance-based manuscripts in the works, plus a non-fiction book on boating.