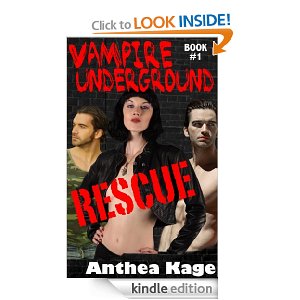 Two men. One hated by society for crimes he's never dreamed of committing. The other sworn to rid the world of an evil he honestly believes exists. Tess can't keep her hands off either of them.

Tess knows that vampires are not the monsters everyone claims, and has devoted her life to saving as many as possible from government-mandated execution. By day, she poses as a sweet office girl at the Vampire Disposal Agency, gathering information for the Vampire Underground. By night, she runs across rooftops clad in a leather catsuit, rescuing vampires marked for death, and dealing--swiftly and brutally--with anyone who gets in her way. She has no time for passion, until she meets Drake--the first vampire to ever make her pulse race. The two spend a red-hot night together that she knows is a bad idea, and once that spark is ignited she can't seem to extinguish it. Before she knows it, a Vampire Hunter named Troy has fanned the flames into an inferno. Tess knows that getting Drake to safety is her only priority, and she knows Troy is the enemy. But when passions run hot, all sorts of things can go wrong.


PURCHASE AT AMAZON!
Posted by Cheryl at 4:09 PM