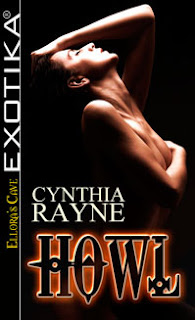 To escape madness, Scarlet Rhodes made a magical pact to serve as a blood slave and sexual plaything to Hayden, a powerful vampire. But while Scarlet is a treasured pet, she has never captured his heart. When Hayden bids her to sexually service a handsome werewolf named Rand Stamper, she finds herself falling for him. In and out of bed.

Rand has come to Fairfax Manor to secure the southern hunting grounds for his pack, but finds himself distracted by the vampire’s blood slave. Their passion is undeniable, and he has the urge to take her with him and make Scarlet his own.

Seeing his sexy human slave with the swaggering wolf awakens feelings for Scarlet Hayden wasn’t even certain he was capable of anymore. But he can’t blame his pet. Despite the unfamiliar feelings of jealousy, he finds himself drawn to the sexy wolf also. If he plays his hand right, in the end he might be able to keep Scarlet and the werewolf for himself.

A wolf’s howl echoed in the distance.

Rand Stamper’s hackles rose. Not that he minded wolves, as a member of a werewolf pack he had a soft spot for the animal variety, but he did have the urge to join in and any sign of aggression could get him killed. He needed to keep his human wits about him if he wanted to make it out of this place with everything his pack needed.

He’d been shown the way by a crusty old butler who looked at him as if he were a mangy mutt and he had to admit that he felt that way in this place. Yep. Dracula would feel right at home at Fairfax Manor.

Unfortunately, Rand didn’t feel the same way about his digs for the next week. The place screamed wealth, position and power. Not to mention a creepy gothic vibe that just plain freaked him out.

He was more of a meat-and-potatoes, ranch-house-in-the-suburbs kind of wolf. Especially the meat part. Vampires, like Hayden Sinclair, the owner of Fairfax Manor, loved the high life. Caviar and bloody dreams or some crap like that.

Sconces lined the gray stone walls, providing precious little light in the depressing room. Not that a vampire would be eager for some sun exposure. An ornate chandelier hung from the muraled ceiling. It had been bewitched so the characters had the ability to move and interact with one another.

It could only be described as pornographic.

Well, maybe the ceiling wasn’t so bad after all. With a couple of beers and a shower, he might be able to get into a little mural action. Could help him relax during his stay in Castle Creepy.

A scent in the room caught his attention. He inhaled again, sniffing the air. Female.

It emanated from the king-size bed settled in the center of the room. The long velvet curtains were drawn, obscuring his view.

He stepped forward, adrenaline pumping through his veins. He could feel his teeth elongate and his hands curled into fists as he readied himself for a fight. He sniffed the air, but couldn’t quite determine if the female presence was vampire or human.

A muffled voice from behind the curtain? He yanked back the drape, but his growl of displeasure died in his throat.

The vampire had left him a gift. A luscious little human gift. When he went to negotiate with the witches, they’d only left him magical mints on his pillow that turned any flavor you wanted. Chocolate mint, vanilla mint, and his personal favorite, bubble gum mint.

But this was way better.

A young woman had been artfully tethered to his bed. Naked and vulnerable, she had a black ball gag between her full, red lips. Around her neck, a crimson collar. Her long, slender legs had been tied to either side of the bed posts with a thick rope, while red scarves beneath her bindings shielded her tender skin from rope burns.

Another red scarf wrapped around both of her wrists, rope covered that too, and they had been tied to the headboard, which caused her large breasts to be thrust up like an offering. Two pert nipples capped those big globes. She had lush hips and her sex was delightfully bare, showing only the glossy pink lips between her creamy thighs. The woman had a classic beauty. She had curves, breasts and hips. In short, exactly what he enjoyed in a woman.

His cock hardened behind his jeans instantly, pressing uncomfortably against his fly.