Free for Kindle: Rings of Paradise by Maxine Douglas 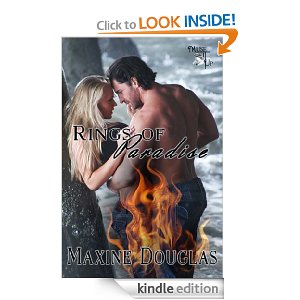 I’m not much on putting words to paper, action is more up my alley. I’m Flame, the reigning champion in the Universal Wrestling World (UWW). So why am I here?

I grew up in a wrestling family and cut my teeth on the squared circle, which by the way is the only “lady” I trust any more.

I’ve gone and bought out a small press magazine in Madison, Wisconsin that was going nowhere fast, hired a woman by the name of Khristen Roberts, who according to the editor-in-chief is untrained and wants nothing more than to be a journalist.

Okay, I’m a sucker in helping people out, it’s my one weakness, if I have any. Problem is she’s on vacation in Hawaii. I’ve got to catch up with her somewhere along the line for her to join up with me and the UWW. I just hope Khristen is up for the ride…it’s always a trip.

The beautiful eyes of the man from the plane seemed to appear as an apparition in the deep-blue-green pool water. Thoughts of him ran wild in her mind, and Khristen felt the warm wetness of desire grow deep between her thighs. She shivered from wanton desire. Something about him seemed familiar.

No. Surely, I would have remembered if we’d met before. His eyes, if nothing else, would have been burned into my memory.

It seemed as if she’d seen them, and the challenge in them, once before—a dare to defy him in any manner.

Challenges. That’s what gave Khristen her drive. In her career, she had felt like a lamb lost in the fog in search of its home. She longed for the type of position that offered her the unexpected excitement of a contest each and every day.

Her current position at one of Madison’s once top magazines came very close to fulfilling that yearning. It offered variety in its article context, and nine times out of ten, they didn’t read like something out of Miami Vice. Plain Talk covered just about anything and sometimes everything. Still, something was missing.

She’d finally come to realize she wanted to be a staff member who did more than run around the office. She was going to spend the next few weeks thinking of a plan to convince Ric to move her up the ladder. One day, she would have her own byline.

Ric Scott, the magazine’s editor-in-chief, had become the big brother she never had. He drank too much coffee in a day for one human being and stayed at the office until well past midnight. She worried about his excesses in both areas and feared one day she would walk into his office to find him slumped over his desk.

More than once, she had wondered why their relationship had never gotten past the big-brother stage. Deep in her heart, she knew it was the lack of emotional and sensual challenges. The spark she felt with a total stranger wasn’t there with good ol’ reliable Ric.

Khristen slid a pair of red-framed sunglasses from the top of her head and perched them on her nose. She took a deep relaxing breath, leaned back, and forced the man’s image out of her brain. She knew she had to let this challenge go for what very well could be the first time in her adult life. If letting go was at all possible.

For now, one thing she knew for sure. Absolutely no way was she going to become caught up in another romance. The last one had almost destroyed her, both emotionally and professionally.