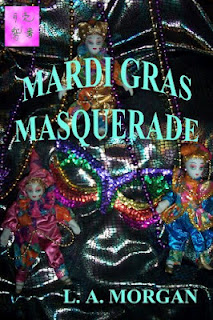 In this Cinderella story, a shy librarian pretends to be her friend, a glamorous model. Swept away by the romance she finds in New Orleans, her masquerade brings her more happiness and more regrets than she has ever known. The old saying is true: Oh, what a tangled web we weave when first we practice to deceive.

Maria Jones, a shy librarian, shares an apartment with her best friend from high school, Maria Fontaine, a successful fashion model. After a clerical error in their school days, she refers to her friend as “Marla.” Maria lives vicariously through Marla’s adventures up to the time the model becomes engaged to Tienne DuPont, a wealthy shellfish exporter from New Orleans. After a two month separation, Marla decides to call off her long-distance engagement, so she wheedles Maria into meeting with Tienne to tell him the bad news. Mardi Gras has begun, and Maria had always dreamed of going there, so she takes on the challenge.

Taking the hotel suite that was reserved for Marla, Maria assumes her identity until she can meet her roommate’s formidable fiancé. Unfortunately, Tienne is too tied up with business to see her at this time, so Maria goes out to enjoy the festivities. She ends up on the levee after dark, where she is accosted by a sleazy man. At that point, a masked and caped man steps out of the darkness to save her, but at what cost? He implies she is safe with him, but only for now. What does that mean?

Daring to be as bold as her model roommate, she agrees to meet with this man the next day. He is pleasant and charming when he shows her the sights and takes her out to lunch. Just as the relationship starts to bloom, a startling disclosure occurs.

This leads Maria into a world of romance and intrigue beyond her wildest imaginings. Time and time again, she is drawn to tell this man about her deception, but her feelings for him prevent her from doing so. Her inexperience with men is her downfall. This leaves her with growing regrets, as her web of deceit continues to grow denser.

In the meantime, she tries to call her roommate, who promised to be there for her as a strong ally. Marla, in fact, left the country with her new boyfriend to go to Carnival in Rio de Janeiro. This leaves Maria well out of her depth with the man that has claimed her as his own.

Maria becomes a captive, not merely to the lies she has been compelled to tell, but to her love for this man that has become her captor. In spite of all of her efforts, her masquerade becomes more involved. At the same time, the romance that she finds goes beyond anything she has ever known. The clock ticks away as she passes the point of no return. In all probability, her dreams will come crashing down around her if she cannot stop this relentless charade.


CURRENTLY FREE ON AMAZON!
Posted by Cheryl at 1:40 AM