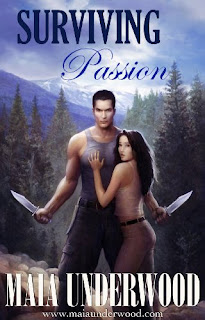 "It's a strange time when the safest place in the world is in the arms of the person who frightens you the most."

After the violent death of her father, it is Selena who becomes the ghost. Every day is a lone struggle for survival in the wilderness, more than a decade after the fall of modern civilization. No longer subject to law, order, or the social norms of its domestic past, the primal nature of man has reared its head with alarming swiftness.

From her own frightening experiences, Selena has learned just how dangerous men are. Now, she avoids them at all costs, mastering a thoroughly elusive lifestyle, until she meets her match. After a chance encounter, Selena's life is swept on a tide of chaotic involvement with Dan, an intense but disciplined leader who clashes with her approach to survival on every level. Through her wild experiences with this frightening but captivating man, Selena learns that the human animal loves as passionately as it kills.


PURCHASE AT AMAZON!
Posted by Cheryl at 9:52 PM