Free for Kindle: Trouble with Harry by Myla Jackson 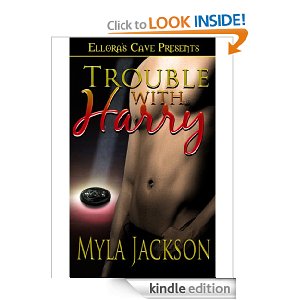 In 1924 Harry, an adventurous archaeologist, uncovers his greatest discovery—the tomb of the daughter of Shah Azhi "the devil king", containing the magical stone of Azhi. Legend tells of the stone's power to grant wishes. When Harry lays his hands on the prize, he's sucked into a bottle and stays there for over eighty years.In the twenty-first century, lonely museum worker Edie Ragsdale has been tasked with cataloguing the contents of a sarcophagus. Among the mummified remains of a long-dead princess, Edie finds a bottle. When she brushes away the dust of thousands of years, a naked Harry appears. Because she was the one to wake Harry from his long sleep, Edie is able to wish for anything her heart desires and Harry has to grant it. But when her wishes land her on the set of a porn film and the deck of a pirate ship with a hundred sex-starved pirates ready to teach her a few lessons on sex, Edie has to rely on handsome Harry to bail her out.Come along for a sexy, rollicking romp and learn why you should be careful what you wish for!