Free for Kindle: Kiss Me Deadly by Michele Hauf 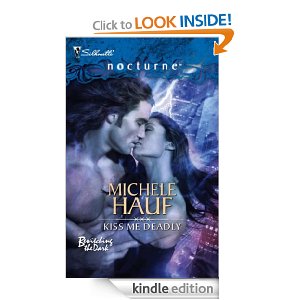 Death cocktail is what the vampires call a witch's blood. It's poisonous-- a drop will destroy a vampire within minutes. Nikolaus Drake is the rare vampire who has survived his first taste. Now he's on the hunt for the witch who almost brought him to his demise-- Ravin Crosse.

A witch who spends her nights hunting vampire tribes, Ravin has three obligations to fulfill to set her soul free. One of those obligations-- crafting a love spell-- twists her world upside down when Nikolaus draws the spell from her veins. Natural enemies rarely make the best bedfellows-- but is it possible their intentions are really, truly the same? Can Nikolaus's tribal loyalty survive if he surrenders to desires far darker than his own?