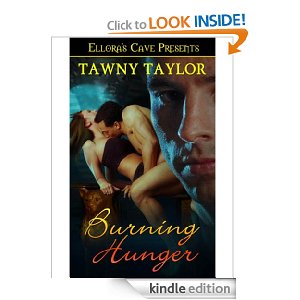 Book 1 in the Twilight's Possession series.

Private detective Brea Maguire is on her first case, tracking down a stolen statue — the Sacred Triad — before it's buried in the black market. Unfortunately today — Friday the Thirteenth — isn't her day. Being kidnapped from the mall by a pair of bizarre guys who put the Chippendales to shame didn't figure into her new career plans.

Dayne and Marek have their own problems. Dayne, forced into a blood-bond with Marek, his sworn enemy, sees his chance to exact vengeance for his family's slaughter slip away. For Marek, the blood-bond with Dayne may be too late. His enemies have learned the secret of the Triad, which holds the only hope for a cure for his dying brother, the king.

Marek can help Brea find the Triad and use it to save his brother's life, but only if she too enters the blood-bond. The burning hunger that accompanies it is a major complication none of them anticipated.

Two men, one woman and a driving sexual hunger that none can resist, in a race against time to save one man—or destroy thousands.


PURCHASE AT AMAZON. Currently free, but that could change at any time.
Posted by Cheryl at 7:36 PM