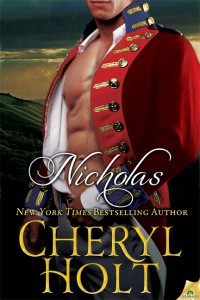 Now dedicated to the army, Nicholas Price vowed never to return to Stafford Manor. Since he has no interest in the estate, he hires Benedict Mason to oversee it. Mason's draconian policies lead Nicholas into the path of Emeline Wilson.

Emeline has lived her entire life at Stafford Manor. After her father’s death, she is the sole caregiver for her twin young sisters. When the citizens can no longer tolerate Mason’s dastardly behavior, they nominate the over-educated Emeline as their spokeswoman.

Tempers soon clash, but Emeline is certain a better man hides within the roguish Nicholas. Danger abounds from those determined to keep them apart. Will their love survive the wickedest of enemies?

If you’re looking for a hot romance, you don’t have to look any further than Nicholas. Memorable characters and a riveting plot have the reader turning pages quickly. It’s a book that is difficult to put down. While its formula is predictable, its appeal is in how the story unfolds. Holt is an engaging storyteller. With Nicholas and Emeline, she has created two people who for every reason under the sun shouldn’t be together: her innocence versus his experience; her pure reputation versus his scandalous behavior; her desire to find the good man inside him and his need to assure her that no such man exists. And yet, you know in the end, it will all work out. Getting there is half the fun.

What I truly liked about this book was Holt’s decision not to make it solely about Nicholas and Emeline’s romance. Her secondary characters are equally well-developed. Nicholas’s younger brother, Stephen, has his own story that is woven into the mix. In some ways his story is connected to Nicholas and Emeline, but in other ways it’s totally separate. The one thing that confused me is the first time we meet Stephen, he acts very different than the next time we meet him. And though his character sometimes slips into the angry man we meet in the opening chapter, I felt he experienced a sudden change that went unexplained. It might be the way in which we meet him in the beginning, but it bothered me throughout the book.

Nicholas is a superb read. I would read it all over again if I didn’t have so many books in my TBR pile. This is a great book to take to the beach or lounge with in front of the pool.

The author provided me with a free ecopy of this book in exchange for my honest opinion. I received no monetary compensation of any kind for this review. 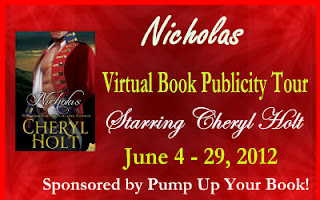