Book Spotlight: Pursuit of the Devil by Ian MacRae Smith 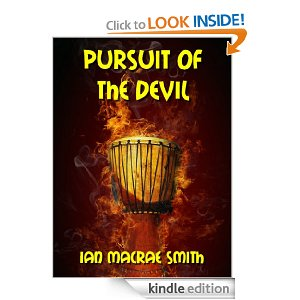 Set against an international background, this is a tale of greed and corruption. The year is 1978. In Ghana, West Africa, the Republic’s first President, Kwami Nkrumah is deposed in a military coup led by Flt. Lt. Rawlins. (This is extensively documented elsewhere)
The reason for the up-rising is corruption within the government. It is alleged that vast sums of money have disappeared from a number of major construction contracts. For the purposes of our story, the Volta River Project is one of them - the money diverted to fund an insurrection aimed at re-instating the former regime.

Two brothers working for a British Company striving to do business in the region with their revolutionary new equipment are caught in the aftermath of the coup. Inadvertently, one picks up a strange metal object later suspected of having a Voodoo connection. Is it this or industrial espionage that is responsible for the deaths and destruction of lives?

In the course of events both brothers meet and fall in love with young women who themselves become inextricably bound up in events. A complication arises when one of the young women is rescued from unwanted attention in a cafe at London’s Heathrow Airport by a Canadian businessman. An enduring relationship develops.

The novel abounds in twists and turns, suspicion and deceit, making it a compelling page turner - a truly readable and unforgettable work in which the reader is drawn into the emotions of the principal characters as they are confronted with circumstances beyond their control.

Currently available at Amazon!﻿
Posted by Cheryl at 11:00 PM