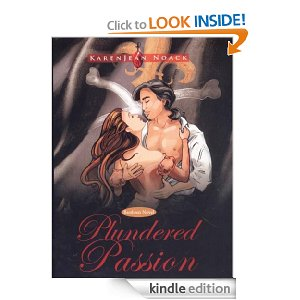 This book has the ability to port you into another time and world. It contains rich characters that will fascinate your imagination and has cover to cover appeal, with a fast moving storyline. Although rugged pirates, these sailors are men one would love spending hours dreaming about in a pulse-pounding romance. The story contains an epic sea battle, steamy love scenes, a villain one loves to hate and laugh out loud moments that will titillate your reading pleasure. Although a new series, it has already formed a faithful following. It is the precursor to our U.S. Navy and the first of many books that will soon follow.
In the late 1700’s a new generation of American pirates different than any others had emerged. They were a group of southern gentlemen known as “The Brethren.” Cole Lairèt, a notorious pirate "The Raven" had been persuaded to attend The Masquerade ball by a fellow pirate, Jock Clavinet, in his hometown of New Orleans.

On the day of the event, the Remineuel household is in a tizzy preparing their fair-haired Julianne to accept a queen’s crown of the festival. She is considered the most stunning sought after Miss in the City. On the other hand, the second daughter Monique has yet to experience a suitor of her own. Her daily existence is filled caring for a sickly mother and the rearing of her twin brothers. What pains her life the most, is the spiteful hatred of her sister Julianne.

At the ball, the chestnut-haired Monique meets "Raven", a dashing stranger and they are instantly drawn to one another. Using his title “The Marquis Cole Lairèt” to hide his true livelihood, they dance and later kiss under an oak. Unknowingly, the embrace binds them against sound judgment. Upon discovery of the attraction, Julianne flies into a rage and gleefully plots their demise. To maintain her social standing, the spiteful Julianne is determined to keep Monique in the shadows to live a spinster’s existence.

Raven is then compelled to flee back to sea and free himself from the unwanted entanglement. Crossing paths on the high seas, Monique is devastated to discover that her prince charming is non-other than a pirate. Even so, the flames of passion still thrive compelling their two worlds to become one. Will love survive the treacheries waves in the warm Caribbean? Come and read for yourself.