Celebrating the Month of Love: Krewe Daddy by Margie Church 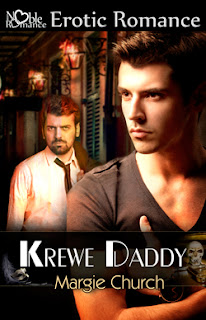 Luis is the Daddy, a sought-after lover, with an ego to match the mammoth-sized Mardi Gras floats he designs. His lifestyle and reputation are wearing him out, but Luis can't find a satisfying way to break the cycle and be happy, too.

Drew's insecurities pushed him to have a foolish affair six years ago. It destroyed his relationship with Luis, and he's never been able to commit to anyone since. Now, he's taken control of his life and changed his submissive personality by becoming a model for Kevin Marks, and a wildlife enforcement agent in New Orleans.

These men haven't forgotten each other, or settled their differences. When they accidentally meet in a French Quarter gay bar, the years of regret, anger, and pent-up emotions erupt. Their passion is as hot as ever, their mistrust just as potent. When Drew's future is in Luis' hands, will he choose his lifestyle or love?

I've never written a book this fast – almost 63,000 words in 10 weeks. I was inspired. If you're a fan of m/m romances, then I hope you'll pick up a copy of my newest book, Krewe Daddy. It's the story of the one who got away and love found. You'll revisit Kevin and Teak from Hard as Teak, and meet a host of new characters in an action-packed romance.

Get a copy today at Noble Romance.
CONTEST: To celebrate the release of Krewe Daddy, I'm giving away an eBook copy to one random commenter. Make it snarky, make me laugh, cry, move me somehow and you could win the very first copy.
Find out more about Margie at her website and blog: http://www.romancewithsass.com/
Buy all her books on Amazon.
Posted by Cheryl at 3:04 PM