Celebrating the Month of Love: The Horseguard's Lady by Killarney Sheffield 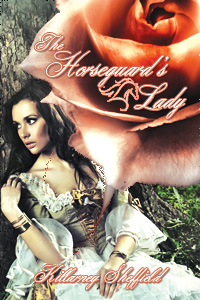 Lady Rosemary Wellington is your typical London debutante who faces a life of eternal boredom when she is betrothed to the Marquis of Joliemere. However her grandmother's plans for her go awry when Rose decides to help her cousin, Princess Elizabeth, escape her own unwanted marriage. Rose finds herself kidnapped by the leader of a Russian rebel group of Cossacks.
In steps our hero, Prince Dimitry Peterlovsky. He has been put in charge of catching the rebel Cossack leader, a task that may not seem all that daunting, however it is a true test of his loyalty to the tsar. Life becomes even more complicated for him when he rescues Rose. He believes her to be Princess Elizabeth, which comes with a huge host of political problems. Now, his country is facing a potential war with Britain and France, but he has his doubts. Could she really be Sergi's ally? Or has he made a terrible mistake?
Excerpt:
When he entered the library, he found the princess with her nose pressed against the glass of the window watching the rain pour down outside. He stood on the threshold and watched silently as she sighed, turned from the window and crossed to fireplace. She looked up at the portrait of his mother and father. He crossed the room quietly.

“That is a portrait of my mother and father,” he explained, once he was directly behind her.

She jumped, so engrossed in the portrait she had not heard his soft tread on the carpet. She spun around and bumped into him. Dimitry wrapped his arms around her waist to steady her. She looked up at him and froze, her lips forming a small pink “O” of surprise. Suddenly, the air in the room seemed too warm and heavy.

Mesmerized, he stared hungrily at her mouth. His hand lifted involuntarily and he brushed his fingers gently across her injured face. She took a small breath, but didn't flinch. He willed himself to back away, but his feet seemed rooted to the floor. She was the enemy, but all he could think about was touching her, tasting her… Her lips trembled. A sigh of sweet breath escaped as he traced her full lips with his thumb. He could hold back no longer. With a groan he slid his hand around the back of her neck and drew her mouth to his own. He watched as her eyelids fluttered in anticipation. Their lips touched, and he was lost in the feel of her silky skin, the floral scent of her and the taste of her full sweet lips. Her body betrayed her own passion as she sagged against him and her arms found their way around his neck. His kissed her tentatively at first, running his tongue seductively across her mouth. She was like an intoxicating drink. He needed more. Pressing his lips harder against hers he demanded entry into her sweet mouth. She moaned, parting her lips and granting him entry. Their tongues touched sending shock waves throughout his whole body. He sunk his hands into her rich tresses and tilted her head back. Releasing her lips, he trailed delicate little kisses along her jaw and down the sensitive side of her neck.

He stiffened. What was he doing? He had come here to confront her, not seduce her! With a groan he pulled his lips from her neck and shoved her away from him.

Her eyes flew open, her gaze startled and bewildered.

“I just came to get a book,” Dimitry explained. He snatched the first book he saw off the nearest shelf and retreated back to his study.

Victor looked up as he entered. “That was quick. What did she have to say?”

“Nothing of importance,” Dimitry mumbled, dropping the book onto his desk. He poured himself a brandy to steady his galloping nerves.

Victor picked up the book, glanced at the cover and gave Dimitry an odd look.

Dimitry sat down behind his desk. “What?”

He snorted. What was the man talking about? “Roses?”

Victor held up the book. The title read, A Guide to Growing Roses.

He snatched the book from Victor’s hand and dropped it into the top drawer of the desk.

“Must have picked up the wrong book by mistake.”

Victor leaned back in his chair and pondered him. “Is there something you would care to share with me, dear cousin?”

Dimitry pretended to scan the documents on his desk. “No. Should there be?”

“You look like the fox caught raiding the chicken coop.”

Dimitry groaned and looked up, realizing Victor saw through his ruse. “I kissed her.”

“Kissed who?” Victor asked with a grin.

“You know damn well who.” Dimitry scowled at him. Why did his cousin always seem to delight in his uncomfortable situations?

“And?” Victor raised an eyebrow.

“And nothing. For starters she is already engaged. Second she is a spy, and third I will probably have the whole damn British navy on my doorstep, not to mention the French in a matter of days.”

“Then you do not have much time. It will not matter if you use a little seduction to get the information we seek. Maybe after a few kisses and romantic promises she will confess to being a spy.”

Dimitry glared at his cousin. “I am not going to seduce her.”

“Then why did you kiss her?” Victor cast him a smug smile.

Dimitry took a gulp of his drink stalling while he tried to think of a reasonable sounding answer. Why had he kissed her? It had been a long time since he had lain with a woman. The princess was certainly attractive. Had she bewitched him with her lovely eyes and melodic sounding voice?

Victor snorted. “You are in love with her.”

Dimitry's tongue refused to form the words to deny it, even as he shook his head.

“Do you realize how dangerous that could be? She could just be trying to seduce you into letting down your guard so Sergi can kill you.”

“I thought you did not believe she was a spy?” Dimitry retorted.

Victor shook his head, his lips pressed into a thin line, worry creasing his brow. “I changed my mind.” 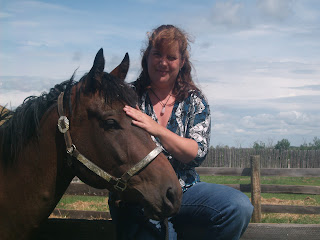 Killarney Sheffield is the mother of five, married 15 yrs to a retired dairy farmer and currently resides in Alberta on a beef farm. When she's not writing she likes showing her thoroughbred stallion (nicknamed Love Monkey), gardening, camping, listening to her iPod and even playing a little Guitar Hero with her kids.

Visit her online at http://author-killarney-sheffield.spruz.com/  and http://www.museituppublishing.com.
Enter for your chance to win an e-copy of The Horseguard's Lady by completing the Rafflecopter form below.  Good luck!