Celebrating the Month of Love: Dance of Desire by Catherine Kean 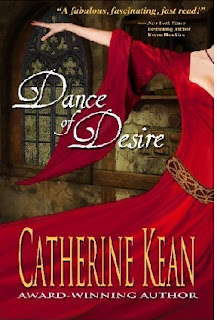 She risked everything in one seductive dance . . .

Disguised as a veiled courtesan, Lady Rexana Villeaux dances for Fane Linford, the new High Sheriff of Warringham. Desperate to distract him while her servant steals the missive that condemns her brother as a traitor to the Crown, she entices Fane with all the passion in her soul—and he is tempted.

A hero of the crusades, Fane has been granted an English bride by the king. Fane wants only one woman: the exquisite dancer. When he discovers she’s actually a highborn lady, and that her rebellious brother is imprisoned in his dungeon, he will have no other wife but her.

Rexana doesn’t want to become the sheriff’s bride, but it may be the only way to save her brother. Yet as she learns more about her brooding husband tormented by barbaric secrets, she finds it harder and harder to deny his love or their dance of desire.

Each step brought Rexana closer to the dais. To the dark skinned man with wild black hair and eyes that glittered with frightening intensity. To the barbarian Sheriff Linford, who held her brother’s fate like the fig caught between his fingers.

She silently cursed her stiff limbs. Her body was no stranger to creative expression. Yet, when she danced in the meadow, she had only the birds, still water, and ancient willows watching. There, she danced for herself.

Never for a man.

A shiver tore through her. She must focus, draw upon her heightened emotions, use her anxiety, sorrow and fears to enhance her performance.

She must not fail.

Ignoring the appreciative stares of the noblemen around her, she whirled across the space directly before the sheriff. Dry rushes scratched against her feet, an odd sensation. The pungent scents of dried basil, fennel, and rosemary floated up from the floorboards. Cool air brushed against her naked stomach. She fought the urge to cover herself.

Raising her lashes a fraction, she glanced at Linford. He was not watching! He conversed with Lord Darwell whose tongue, as she well knew from past feasts at Ickleton, always loosened after a few goblets of wine.

Disquiet swirled inside her. Curse Linford! Did the rumors not claim that he enjoyed eastern courtesans? Why, then, did he ignore her?

She spun in a graceful turn. Still, he did not watch.

Frustration bubbled in her throat. By the saints, she must distract him, otherwise Henry would not be able to slip into the sheriff’s solar to find the missive.

Too many lives depended on her. Most of all Rudd’s.

Rexana cast the musicians an urgent glance. Faster, her mind cried. As though sensing her urgency, the drummer nodded, quickening the pace. She threw out her arms and stamped her feet. The tiny bells at her ankles chimed.

Whirling even nearer the lord’s table, she thanked the holy saints that the poor lighting and dark cosmetics would hinder Darwell from recognizing her. As would the veil and head covering, she silently reminded herself. The musicians had commented earlier how thoroughly all her features, except her eyes, were concealed.

Linford glanced up. Over the floating veil, she caught his gaze. His eyes were brown and shadowed by wickedly long, black lashes. His wary, perceptive gaze slashed into her with stunning force.

She stumbled, caught herself, and disguised her falter with elaborate turns. As she spun back to face the dais, she saw Henry edging his way to the stairwell.

Fear sharpened her breaths. Her gaze shot to Linford. He had not seen Henry. Laughing at a comment from Darwell, Linford turned the fig slowly in his fingertips. The sapphire ring on his hand glinted as he tossed the fruit into his mouth, then stared directly at her.

So, she had captured his attention.

A spark of satisfaction warmed her. With a smooth swivel of her hips, she dropped to the rushes. The drummer faltered, then resumed his frantic pace. Do not fail me, she prayed.

With catlike movements, she crawled across the coarse rushes. The tang of crushed herbs, rotting food scraps, and mildew filled her nostrils. Never in all her years had she been this close to a hall floor. Her mother would have swooned with horror to hear of such an occurrence.

A blush stung Rexana’s cheeks. Resisting the urge to scramble to her feet, she rose up on her knees, arching her spine to flaunt her bare skin. She must focus on her goal, not her fear. No one recognized her. No one would ever know of this incident. Once Henry had the missive, she could forget all about this eve.

Curving her arms in an elegant move, she straightened and rose to her feet. She peeked at Linford through her splayed fingers. His gaze met hers. He slid another fig between his teeth, chewed, then licked his bottom lip.

She glided toward him.

He resumed talking with Lord Darwell.

A scream burned for release. Stubborn, stubborn man. She had piqued his curiosity. Now, how did she keep him enticed? How did she hold the interest of a savage?

Heady anticipation shimmered through her. She must think like a barbarian. Act the part of an infidel courtesan. Play to his desires. Reveal the wildness trapped in her soul.

“On a scale of 1-5 stars, this is definitely a 6 star book!” —Affaire de Coeur Magazine

PURCHASE AT AMAZON AND BARNESANDNOBLE.COM! 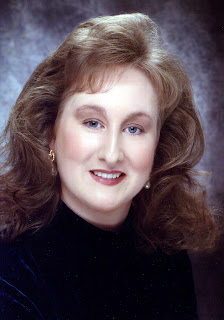 
Her other medieval romances have also garnered accolades. Among them, My Lady's Treasure won the historical category of the 2008 Gayle Wilson Award of Excellence Contest and finaled in the 2008 Next Generation Indie Book Awards. A Knight’s Reward was a 2008 National Readers’ Choice Awards finalist.


Catherine also writes contemporary romances under the pseudonym Cate Lord. Busy working on her next novel, she lives in Central Florida with her husband, daughter, and a spoiled rescue cat. For details on her novels and upcoming appearances, please visit her website: www.catherinekean.com.
Posted by Cheryl at 12:00 AM