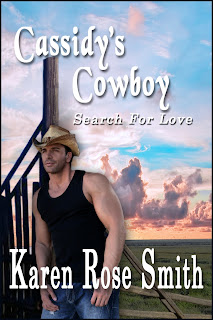 Cassidy Sullivan has secrets. Her mom died when she was five and she'd never known her dad. A life in foster homes ended up with her on an icy road in a hot-wired car on her way to trouble. An accident and a kind widowed rancher took her in and taught her the meaning of unconditional love. Last year, her twin sister Lucy (from book 4, Search For Love, ALWAYS HER COWBOY) had found her through using psychic Gillian Moore. Now Cassie wonders if Gillian can help them find their father.

Before they can begin, Cassie meets Ben O'Donnell her foreman's nephew. Ben is a wealthy CEO who has brought his daughter to Twin Pines Ranch to help her recover from her mother's abandonment of them both. Since Ben spent summers on Twin Pines under his uncle's watchful eye when he was a kid, he knows the value of ranch life. He's hoping it will bring his daughter Julie some much-needed happiness.

Neither Ben nor Cassie count on the immediate and potent attraction between them that goes deeper than chemistry. If Cassie confides her secret to Ben, will he turn away? Even if he doesn't, what kind of future can they have if they live a country apart?

The search for a father and true love is a lot to handle at the same time. But Cassidy Sullivan isn't your ordinary cowgirl, and Ben O'Donnell could possibly become CASSIDY'S COWBOY.

When Ben dismounted in the corral, Clem, one of the younger hands, took the reins. "I'll groom her," he said.

"I walked her the last quarter mile so she's cooled down," Ben told him and Clem nodded.

"Is Miss Sullivan around?"

"In the barn with your daughter," Clem said, pointing.

Ben wondered how they'd spent the last hour. When he found the two of them he had to grin. They were mucking out a stall.

"Had about enough of that?" he asked Julie.

She shook her head. "I like working with Cassie. She fed Sunny a cookie. And you should feel Buttercup's nose. It's soft."

This was more animation than he'd seen in Julie in a long while and he had Cassie to thank for that.

"Can I go see what Sunny's doing?" Julie asked.

Cassie glanced at Ben but then told his daughter, "You can go watch her, but don't go near the gate."

"I won't," Julie said, and ran off through the barn and out the other door.

"She's actually enjoying herself. At home I can barely get her to smile."

"Maybe that's because here she doesn't have things around her here that remind her what happened."

Ben had never thought of that. They were living in the house where they had been a family, where he'd thought they'd once been happy, where Julie had felt secure with two parents. Now, when she looked around at everything, she probably realized even more what she'd lost.

"How do you know these things?" he asked.

Cassie laughed, her brown eyes expressive and warm. "I know them because I was once a child who'd lost a lot. It's not so hard to figure out when you've gone through it."

He studied Cassie again, realizing how much he'd like to take her in his arms and kiss her. He had to admit, when he wasn't worried about Julie, he was thinking about Cassie and how she'd looked in her robe last night.

As if her thoughts had drifted to a similar vein, she asked, "Did Julie tell you what her dream was about last night?"

"No, she didn't. I asked but she was still crying and just shook her head. Why?"

"She told me she was trapped in a thunderstorm with wind and lightning and rain, and she couldn't find you and you couldn't find her."

"So she confided in you."

"I don't know if she confided. She just told me what it was about. I tried to reassure her that you'd always find her."

"Thank you," he said and meant it, suddenly feeling closer to Cassidy Sullivan than he wanted to feel. Something about the hushed atmosphere of the barn, the sunlight playing in the shadows, the way his daughter had confided in Cassie, seemed to make impulse more substantial than cold reasoning. He knew he'd just met this woman, though Loren often spoke of her with admiration for how she handled the ranch. Right now Cassie was as real as a woman could get and he was a man filled with sudden hunger that unnerved him as much as it urged him on.

There was a stray piece of straw in her hair, and he couldn't help but reaching out and lifting it away. Her hair was the color of aged whiskey, beautifully dark brown with a few red highlights. That was probably from the sun. As his fingers slid through the strands of her hair, she looked up at him. He was bowled over by desire that was as foreign as being back in the saddle again was. Before he considered the consequences, he slid his hand under her hair, tipping her chin up to him.

The next few moments changed everything.

She didn't move away...in fact, she leaned a little closer. The underlying message was clear­ she was attracted to him, too. His lips met hers and passion became a part of his life again. He slid his tongue into her mouth and she responded tentatively at first, then with more confidence. Her hands gripped his shoulders and they were locked together in need, and hunger and a desire for more.

But then Cassie suddenly broke away.

He took in a huge breath, willed his raging hormones to desist, and shook his head in exasperation. "I never should have done that."

She stopped and he wondered what she was going to say. "You don't what?"

Cassie looked embarrassed. "I don't have affairs. I don't sleep around."

When she studied him, he shrugged. "The last thing on my mind has been dating. Look, you're a very pretty woman and I've been living in the world of kids, carpooling and running my business. For just that one moment, maybe we both got transported."

She nodded. "I guess so." She seemed to compose herself and her embarrassment was gone. "I have to get back to chores. What are you and Julie going to do?"

"I'll take her for a walk down to the stream. We might spot some deer."

"Rachel made salads and there's roast beef left over for sandwiches. Go ahead and eat lunch whenever you'd like. I have to meet the insurance adjustor down at the guest cabin in a little while."

He knew the chores on the ranch kept Cassie busy. But he wondered if she was skipping lunch to avoid him, to avoid thinking about that kiss that was still singing in his blood, still arousing him. But he didn't put his question on the table because he didn't think he wanted to know the answer. He didn't like the idea of Cassie avoiding him. He didn't like it at all.

"CASSIDY'S COWBOY is an endearing tale with wonderfully likable characters, as those familiar with Ms. Smith's works have come to expect. She's especially adept at relationships between children and adults."

"Whether it is electronic or paper, no one does poignant family dramas better than Karen Rose Smith consistently does." 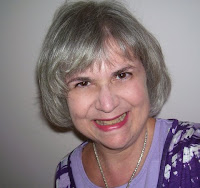 Karen Rose Smith's plots are all about emotion.


She began writing in her early teens when she listened to music and created stories to accompany the songs. After expressing feelings in poetry, earning a degree in English and French, completing short stories that became too long to find a market, she turned to her love of relationships in romance. This award-winning best-selling author (USA Today List, Borders Bestseller List) has sold 75 books since 1991 and has published with Silhouette, Harlequin, Kensington and Meteor/Kismet. Her awards include two Golden Leaf awards in short contemporary romance, the Golden Quill in traditional romance, two cataromance.com's awards for Best Special Editions and Romance Review's Today's Best series romance award. Jane Bowers of Romance Reviews Today states: "Karen Rose Smith's storyworlds are complete and realistic and lovely places to visit and revisit. She excels at stories that feature couples brought together by infants and children, and she handles her plots and characters with sublime sensitivity."


Karen is well-known for writing emotion. An only child, she spent a lot of time in her imagination and with books Nancy Drew, Zane Gray, The Black Stallion and Anne of Green Gables. She dreamed of brothers and sisters and a big family like her mother and father came from--seven children in her mom's family and ten in her dad's. On weekends she was often surrounded by aunts, uncles and cousins. This is the root of her plotlines that include small communities and family relationships as part of everyday living.
She believes universal emotions unite us all and that is the reason she employs them to propel her plots.


It is no secret that Karen married her college sweetheart and they have been married for forty years. She believes in the power of commitment and the hope that goes along with the promise of everlasting love. Along with enjoying time with her husband, Karen enjoys cooking, gardening, shopping, listening to music and keeping her two cats company or vice versa.


Readers can visit Karen's website at http://www.karenrosesmith.com/, her blog at