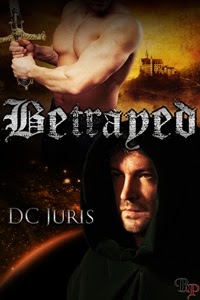 Escaped from a prison camp, is Meldrick still the man Faldor loved? Can Meldrick reconcile who is with who he was, or will betrayal win?

Two years after he lost his soul mate to the war, Faldor still pines for Meldrick. His world is turned upside down when Meldrick appears on his doorstep late one night, seemingly back from the dead. Finally escaped from a prison camp, Meldrick protects a dark secret—one that could rip their rekindled love apart if Faldor ever learned the truth. But the longer they're together, the more questions come up. What really happened two years ago? How did Meldrick escape the prison camp after so long? Is Meldrick still the man Faldor fell in love with? Can Meldrick reconcile who he is with who he was and move beyond his treachery, or will betrayal win?

To read more about this and other new releases from Breathless Press, visit them online at www.breathlesspress.com
Posted by Cheryl at 1:32 PM