Book Spotlight: To Please A Lady by Raven McAllen 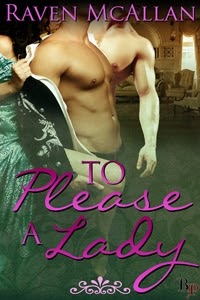 When your lovers are lovers themselves, and want you to help them make the perfect triangle, what do you say? Persuade me of course!
Unconventional, and happy, Hermione is in the enviable position of having not one, but two lovers to attend to her every need. That her lovers are lovers themselves, only adds to the equation. Berry and Ran feel it’s time to make all their various twosomes, into one splendid threesome. Now all they have to do is persuade Hermione!
Being men, they are too impatient to wait for her answer. Being a woman, she isn’t going to be pushed, shoved or coerced into saying anything until she is good and ready. Patience is a virtue, and one her men needed to get.


Read an excerpt!
Taking a deep breath, Hermione straightened her attire, and then, without further volition, walked to the door indicated and boldly opened it.

What she saw, not only gave her pause for thought, an instant need to be fucked, and a view to be given such pleasure as could not be imagined, it also gave her a need to be possessed by the  occupants of the room. Then, at that moment, with no excuses accepted.

No apology would be needed. As she viewed the tableaux unfolding in front of her, her juices flowed, her cunt clenched and her clit begged for attention.

In pictorial glory, she saw her lovers entwined. No other word would suffice. Ran was spread on his back, his legs resting on Berry’s shoulder. From her stance near the door, she could see hows Berry’s cock was held hard inside Ran’s arse, his hands nipping each nipple presented to him so proudly, and Ran’s hands hard on his own cock, moving to the rhythm of the pounding inside him.

“Well, my Lords, I perceive my presence, my body, need not be in attendance for you both to achieve your release. Alas my worry you were pining, and unable to achieve satisfaction without a woman to at least voyeur you, was all for naught. I was wrong, I ascertain, so very wrong. For I perceive you both managed perfectly without me. Therefore I crave your indulgence to retire.” She gathered her skirts and went to remove from the room.

Before she was able to do so, she was caught from behind. Pressed tight up against a rigid cock the throbbing hardness easily noticed through pelisse and over-gown. Whoever held her captive must have experienced great pain with such a swift uncoupling. However that was neither her problem or her worry. Unaccountably hurt, knowing not why, for she knew they were lovers well before she became part of their lives, and had she not indeed spurned them? Still however, she pulled away, facing forward lest her distress show on her face.

Composing herself, she grasped the door handle and turned.

“My Lords, you had no need to cease your amusements on my behalf. Forsooth if I so desired I would stay to watch. As I feel at this moment, my attendance is superfluous, I bid you goodnight.” Proud of her composure she dropped a deep curtsy and swept out.

How she found her way home, she knew not. Her eyes were blurred, her gait uneven. So many questions. Not least why had they let her leave? Why was she feeling so bereft? It was she who had rejected their advances, nor they hers. Why should they not take their pleasure as they were so inclined?
Why not indeed, she thought fiercely as she reentered her bedchamber, and threw her pelisse unheeding towards a straight back chair, and missed. She let it lie on the floor like a discarded toy. I wanted them to realize what they were missing by their perfidy, how mistaken could a woman be?  She smiled ruefully. They were not culpable, she was.

Hermione pulled back the covers and lay down, her back to the door, and looked at the glowing embers of her fire. A bit like my arousal, she thought dismally; without being stoked, it is extinguishing, ember by ember. Angrily she brushed away a tear. If you had not behaved like a spoiled child, been complimented by their desire to show you the delights that could be yours, rather than choosing to be disgruntled, you would now be sated, as would they be. And have a chance to make an informed choice regarding your future instead of now pondering the thought, you may have ruined your chance.

Briefly she relived the delicious feeling as that hard cock had separated her buttocks and she sighed. Well, if to eat crow was the way forward, eat crow she would, given the chance. Melancholy, she closed her eyes. To dream.

Ever since I won not one but two Cadbury "Where Does Chocolate Come From?" competitions in primary school, I was convinced one day I would write a book. My parents encouraged me. My schoolteachers despaired of me—flowery, romantic, not factual. Hey, I loved weaving stories about anything and anyone!
So what happened to my grand ideas?

Life got in the way.

So more years later than I am prepared to disclose (a woman has to have some secrets!), here I am, with Breathless Press giving me my big chance. Thanks, B.P.

Married to my own hero (how cheesy is that?) after a couple of failed hero attempts, we live on the edge of a Scottish forest with two cats and three children as frequent visitors. And now two grandkids. Lucky or what?

I write on my laptop in my study, watching the birds on the bird table, the strange big, black, fluffy "I'm pretending to be a bird" cat sitting on the table and trying to convince the many birds he is invisible, occasionally seeing deer and red squirrel moving past. I am privileged.

As a non-closet romantic, sometimes neurotic, and lover of words, I so enjoy getting involved with my hero and heroines. I hope you do too.

Wallflower's Don't Wilt is the first novel of mine to be published, and can I admit it was written as a dare? Yup, my crit group—Up And Coming Writers—dared me to write it, and then nagged, encouraged, edited, and niggled until I sent it to Breathless Press. My lovely editor, Jackie, saw something in it…and hey, presto, (well, not really, but it sounds good) I am a published author.

Become a fan of Raven on Facebook.
﻿
Posted by Cheryl at 8:36 AM