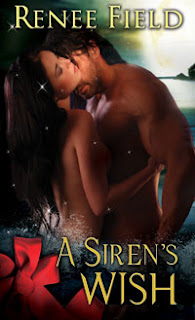 Sasha Rivers was an enticing Siren until a Sea Witch cursed her, turning her into a human and a Succubus.   Her curse – she must have sex or she will go insane.  The problem is the act of having sex triggers the Succubus side of her, forcing her to claim the man’s soul and leave him for dead.

Determined to do some right in the human world, Sasha becomes Dr. Rivers. She uses her Siren talents to help heal patients and all is good until she meets Chase Carter, a policeman diagnosed with stage three cancer. This strong-hearted man pulls at her heart-strings. Sasha offers Chase a choice – to have his soul taken and die with dignity. The task proves in more ways than one Sasha has changed. Will Sasha believe in the miracle of Christmas and risk her life for his or will the Sea Witch’s curse mark her for eternity?

Chase teased the nurse, who must have been close to sixty, trying for the third time to hook the IV into his arm. She laughed, and failed, again. Christ if he didn’t laugh he’d scream because getting poked by a needle hurt like hell. And did she have to be wearing a large shirt printed with a zillion tiny Rudolph the reindeer all over it? Chase turned his head and watched the small snowflakes falling fast outside the window. It was really coming down hard tonight and for a moment he inwardly laughed at the mess his work buddies would have to deal with. Normally he’d love a good snow storm but not when he was stuck inside a hospital. Storms made the nursing staff tense and that was never good.

Since he’d been down this road before, he knew all about putting on his poker face.

“Almost there,” she said. Chase didn’t bother to look. She wasn’t going to get the needle in and he knew it.

She mumbled an apology and thankfully put the needle down. She wrote something on his chart and was about to hit the call button when in walked the sexiest doctor Chase had ever laid eyes on. She didn’t look at him. Instead she walked over to his chart, read it silently for a few minutes, and then and only then did she raise her eyes to his.

He knew exactly what that damn chart said. Dead man. No amount of fancy handwriting was going to change the outcome but he couldn’t quite voice that yet.

Chase nodded. “Go ahead.” He laid his head back down on the overly starched pillow and ground his teeth against the poke and prod as the doctor who looked like she was fresh out of med school moved to the side table where the IV needles were laid out.

She picked up a needle, and then moved around the bed, surprising him. She didn’t say a word, simply took his left arm, not his right since only a blind idiot couldn’t help but notice the veins on that arm had dried up, and started to massage his arm. What the hell?

The nurse, who was fiddling with something to his other side, laughed. “She gets that all the time. Don’t you, Dr. Rivers?”

Chase noted how Dr. Rivers didn’t say anything. Instead her mesmerizing sea green eyes stared at his arm. Chase thought she had the most mesmerizing eyes he’d ever seen. Her fingers gently massaged his limb and he started to feel relaxed. Whatever she was doing felt like heaven. And what do you know, I’m not as dead as I thought. Suddenly Chase got a hard-on the likes of which his body hadn’t experienced in over two years. Christ. He gulped, wishing he could pull his arm free, suddenly embarrassed with his body’s betrayal but equally pleased he could still get it up.