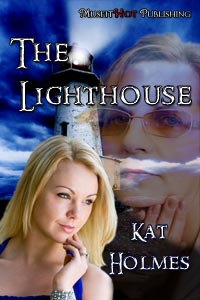 When Rachel Westmont inherits a lighthouse from an aunt she didn’t even know she had, she’s overjoyed. The news couldn’t have come at a better time. Newly divorced from a self-serving doctor, the change of scenery is just what she needs. So she packs up and leaves California for a little island off the coast of Maine.

Rachel falls in love with both Star Island and the beautiful lighthouse and cottage she’s inherited. But, odd things begin to happen right from the first day. Cold chills permeate the cottage and books fly off the shelves. And someone seems to be playing pranks on her.

But when the ante gets upped and someone tries to kill her, Rachel must turn to hunky local sheriff Craig Lewis for protection. Now bodies are turning up, people are getting hurt, and Rachel is starting to suspect her aunt didn’t die a natural death. Can Craig stop a killer from claiming Rachel as their next victim? A little help from a ghost may be in order.

Razor-sharp pain took her breath away. Her body lay broken and death raged to claim her. How cruel fate was. She’d just found peace and it vanished, been stolen from her in the blink of an eye. Why did this happen? What did she ever do to deserve this? Who would care for her beloved lighthouse?

A moment later, or perhaps an eternity, the pain stopped. She felt lighter than ever before. She felt free. No anguish, no loneliness, no misery. Everything in the world seemed perfect and filled with joy. She couldn’t help the laugh that burst from her. This is life as destiny truly meant it to be. Mortal life could never compare to this freedom. Home beckoned.

She looked down at her body as she floated upward. It lay crumpled at the bottom of the stairs leading to the tower of the lighthouse she cared for all her mortal life. She could see the blood pooling around her head and the unnatural position of her limbs. Without a doubt they’d shattered as she’d landed. The sight would horrify her if she was still bound to her human body, but it meant nothing to her now.

Turning away, she looked upward as her form floated, heading for home. Excitement and anticipation filled her with glee. She’d get to be with her dear parents, after so many years apart. She missed them terribly. Her brother determined to break all ties with his past, both his home and what was left of his family, turned his back on her and the island home they’d gown up on. She’d been so alone for too long.

Rising, she finally reached the top of the lighthouse stairs and frowned at the hooded figure. Memory flooded back. The argument that ensued between them flashed before her. Then came the horrible moment when she’d been pushed and tumbled down the stairs. She’d been murdered.

She watched as her killer, calm as could be, walked down the treacherous steps of the lighthouse tower, checked her body for life signs, and then walked out without even a backward glance. No compassion showed on her killer’s face, only cruel satisfaction. No one would suspect her death to be anything other than a terrible accident.

The lighthouse that she’d long served, as keeper, dated back to the late 1700’s. The stairs were steep and very narrow as they wound up toward the top of the lighthouse where the light shined out. It possessed no railing either. It would be so easy for someone to slip and fall, and any fall would be deadly. Everyone would just assume that is what happened to her. No one would suspect she’d been pushed.

She could see the light now. It would be so easy to just head toward it. But she couldn’t leave, not yet. She couldn’t allow her murderer to get away with killing her. She needed to make sure her killer got caught. The light was so beautiful and how she ached to follow it, but she turned away from its promise of peace and joy and headed back down. This lighthouse gave her haven all her life. Now she would haunt it until her murder was avenged. This she vowed.

"...the mystery hooks you from the beginning and keeps you turning the pages."

Kat Holmes is a dreamer and a lover of words. Books have been her passion since she listened to her mother reading to her as a child. She has a desire to write the kind of stories she always loved to read. She believes books are the single most important invention mankind has ever created. Kat started writing when she was only fifteen for her own enjoyment. She still writes for her own pleasure, but now she gets to share that love with her readers.