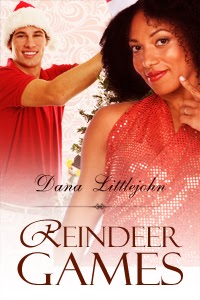 Kinze and Taylor have had an almost perfect arrangement for the last three years. They were both single, but kept each other in mind for holidays, parties or other functions whenever the mood struck. Even though their current understanding was Kinze’s idea, she wanted them to be more. This Christmas, her mission is to make him hers exclusively.

A young girl pulled on her tunic bringing Kinze from her private thoughts. She put her best smile in place and got back into character, handing the child her gift. It was the last day Santa would be at the mall and later there would be a party for those who helped with the shop. Santa and his helpers saw children until the line thinned to nothing. Done for the day, Taylor took Kinze by the hand and pulled her into the break room. He sat at a table in the corner and pulled her between his knees.

“I feel like you’ve been distant with me today.” He pulled off the hat and wig and took her hands. “I know you’re not angry with me about that woman...are you?”

“No, Tay, I’m not mad. I guess, well, I guess she just made me a little jealous,” Kinze admitted, turning away from him.

“Jealous? Really? Wow, I never took you for the jealous type, Kinney. Kinze Dawson, consumed by the green eyed monster,” he teased dramatically.

“No, not consumed,” she corrected quickly.

“It was merely a small attack, not a hostile takeover.”

He laughed. “Well that’s good to know. There shouldn’t be a reason for even a small attack of jealousy. I mean, we’re not exclusive.” She allowed him to turn her face back to his. “Right?”

“You have a type?” she questioned with a raised brow.

“Of course, doesn’t everyone?”

Kinze smiled, as she wrapped her hands around his neck. “Okay, so what is your type?”

“My type is a woman who would take time from her busy life to dress up in dark green tights and a short brown tunic with antlers on her head and a bulbous red nose on her face just to help out a friend. It’s just a plus when she looks good doing it.”

Dana Littlejohn was born and raised in Brooklyn, NY, but has called Indianapolis, IN her home for over 10 years. She fell in love with writing about love early in life and started an own ongoing story in weekly installments to entertain her friends as they passed it around the lunch room in junior high school.
When Dana became an adult she put her love for writing on hold to do the start a family, but in 2003, with encouragement from her husband, she picked up her pen again. To date she has written 3 full length novels, 13 novellas, 42 short stories and has had her stories in 3 anthologies all under her own name and a pseudo for another genre. Her do-do list grows daily and the ideas flow freely. Keep an eye out for what she has coming next.