Book Spotlight: In the St. Nick of Time by K.M. Daughters 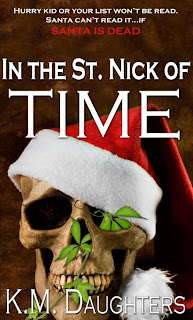 All the Sullivans are good cops… The last Sullivan is a girl. Can she stack up against the boys?Kay Sullivan Lynch, reinstated to the Chicago Police Department after two years as a widowed mom of four, not only plans to excel on the force, but to show her brothers—who opposed her return to “the job ”—that she’s up to the challenge. Captain Flynn Dowd, battling demons of  his own, empathizes with Kay’s struggles—but Sidewalk Santas collecting for the hungry are dropping dead all over Chicago. No apparent motive, no identifiable MO. It’s up to Kay and Flynn to stop the "Santa Slayer." As they race against time to stop the killer, Kay’s grief-deadened senses awaken to  Flynn's overwhelming sexual magnetism. But when he becomes more than just her partner, will her kids' opposition force her to choose between motherhood and her man?

You must be Kay.” She jumped at the masculine voice.

“Your brothers have been waiting for you.” The stranger leaned against a half-painted post, his face hidden in the shadows. “Need help with the cookies?”

“No thanks.” Kay admired the rippling muscles across his back as he bent to drop the paintbrush in the pan and turned, advancing towards her. His crystal green eyes twinkled, snug jeans road low on slim hips. Bare-chested, he strode with athletic grace. Very nice. She shivered, an unexpected, lustful surge zipping through her.

Adjusting the foil that covered the tray, Kay said, “How did you know I had cookies?”

“Every five minutes or so, one of your brothers yells, ‘Where is Kay with the cookies?’” The laugh lines around his eyes deepened with his genuine smile.

“Nice to be wanted,” she grumbled. Shifting the tray on her hip, she gripped the screen door’s handle.

“Hey, I bet my sisters never looked at their watches and wondered, where’s Flynn with the Guinness and chips?” His infectious smile crinkled the corners of his eyes. “My brothers-in-law might, but definitely, not my sisters.”

“I work with your brother, Pat.”

He swung his arm over her head, easing the screen door open. Her hand fell away from the handle, his musky scent pervading her senses. Swiveling, Flynn flattened his back against the screen, propping the door open, and faced her, relaxed, a warm smile lighting his green eyes.

“What has it been? Maybe, a year, and your profiling helped close six cold cases already? Amazing.” Kay exclaimed.

“It will be exciting to work with you.”

“Where’s Kay with the cookies?” Joe bellowed from somewhere out back.

Disarming man. “You sure did. My brother Joe beckons.” Kay chuckled. “Better get these to the locusts. Want one before they disappear?”

Flynn reached under the foil, withdrew a cookie dotted with melted chips, and popped it in his mouth.

Kay’s eyes were drawn to his full lips as his captivating tongue licked a smear of dark chocolate from the corner of his mouth. Her nerve endings fired another sensual blast.

“Now I know why they’ve been so impatient for you to arrive.” His eyes met hers, steady, penetrating, and a slow smile spread on those compelling lips. “These cookies are phenomenal.”

Yeah, it’s all about the baked goods with me. I’ll show them. Kay proceeded through the open door, and Flynn snatched two more from under the foil as she passed him.

“Daughters’ last installment of the Sullivan Boys series is a terrific read. There’s lots of family interaction and a case that will have readers scratching their heads in frustration as each lead comes up empty. The romance plot is every bit as wonderful as the rest of the story. Most entertaining of all are the brief glimpses into the killer’s thoughts that appear as disturbing poems perfectly timed for the season.”

“The motive and modus operandi are unique, the storytelling spectacular, and the conclusion very satisfying.

I highly recommend In the St. Nick of Time by K.M. Daughters. If you want sexy romance and suspense, you'll find it in this book.”

"Their characters, their emotional hooks, and in depth, clear description kept me glued to the pages. K. M. Daughters remains one of my favorite authors and I look forward to their next release."


PURCHASE IN THE ST. NICK OF TIME AT WILD ROSE PRESS AND AMAZON! 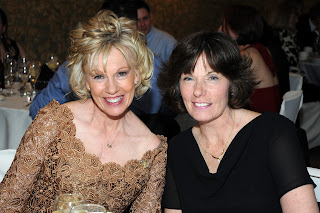 K.M. Daughters is the award winning writing team of sisters, Pat Casiello and Kathie Clare. Their penname is dedicated to the memory of their parents: Kay and Mickey Lynch. “The Daughters” are wives, mothers, and grandmothers. Kathie lives in northern New Jersey and Pat lives in the Chicago suburbs. In addition to their Sullivan Boys romantic suspense series, published by The Wild Rose Press, K.M. Daughters writes inspirational romance published by White Rose Publishing and contemporary romance for Sapphire Blue Publishing.