Book Spotlight: The Gift That Keeps on Giving by Jaxx Steele 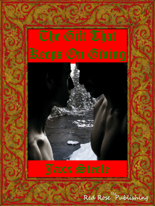 Lovell Johnston was home for the holidays when he met Avery Lockhart. He had made up his mind a long time ago that when he got into another relationship it was going to last. Avery was perfect for him everything he could ask for in a man. He was handsome, educated, sexy, available and totally interested in him. The only thing was Lovell lived in the city and Avery lived in his home town. Would the distance and fear of being a holiday booty call be enough to keep them apart when all they wanted to do was be together?

"How much mistletoe do you need?"


At first Lovell stood there staring at him, but as his shock eased away he finally found his voice as he tried to avoid the man's steady gaze.

"I, I don't know. My sister was supposed to pick this stuff up. The list belongs to her. How much do people usually buy?"

"Well, I guess that would depend on how much smooching you plan on doing," the man answered with a mischievous grin. "With lips as full and sensual as yours I bet you do a lot of that. Perhaps you should return after you've spoken to your significant other and see how much kissing is in your future," he added with a knowing chuckle.

Lovell let out an embarrassed laughed and put his carrier on top of the basket. "I don't have one of those."

"Really? A handsome man like yourself, single? What a tragedy. What's your name?"

"Lovell? Hmm, Lovely Lovell. I'm sure I'll have no trouble remembering that."

Lovell's eyes widened and a soft gasp escaped him. Okay, now he knew he was out of practice, but now he was sure this man was making a pass at him.

He looked at him again and found the man's gaze was mesmerizing. Now he knew what people meant when they said it felt like someone was looking right through them into their soul. His gaze made Lovell feel warm from the inside out. It made his breathing quicken and his hard on returned. The man grabbed a handful of mistletoe and held it over Lovell's head. He moved so close that Lovell could smell his minty breath as his lips brushed his nose.

"Well, Lovell, I would hang about this much over every doorway in my house if I knew you were coming over. I don't like to miss out on a once in a life time opportunity."

Lovell stuttered, unable to make a complete word let alone a sentence. Then suddenly the front door swung open and a blast of cold air rushed through the store.

"Avery, I'm here! I came to pick up that box of decorations for my window," a woman cried cheerfully as she walked across the floor toward the front of the store.

"That's Mrs. David from the bakery. I've got some stuff on hold for her. She's a sweet old lady, but her timing sucks," he said with a soft laugh. "Wouldn't you agree?"

"I thoroughly enjoyed this story. The byplay between the two characters and the diversity of their lifestyles had me laughing, anxious and eager to read more."

"...a feel good story that will certainly leave readers with a happy smile on their face."


PURCHASE THE GIFT THAT KEEPS ON GIVING AT RED ROSE PUBLISHING!
Jaxx Steele was born and raised in Brooklyn, New York, but now lives in Indiana. He dreams of buying a house near the beach and writing all day. He has a nine to five, but traveling to wondrous places that can be incorporated into his stories is his passion. Jaxx has love in his life thanks to his life partner, Hou, and their cat, Judo, who graciously lets'them live with him in what he thinks is his house.