Book Spotlight: Christmas Nick for Everyone by Jaxx Steele 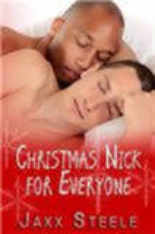 It was Christmas time again and Evan was celebrating the same ole way. Not hanging with the fellas or enjoying a secret Santa exchange at a party, but back at his sister's house. This year, however, would be a little different for Evan. This year he would learn that being a Good Samaritan had tangible benefits as well.

Is this all he had to wear to protect him from the harsh elements?

Evan sighed. Guilt played on his conscious, thinking of the warm home, the late dinner and soft bed waiting for him. He didn’t think the old man had any of that judging from his ragged appearance. The least he could do what he could for the old man. It was Christmastime after all.

“Stay here. I’ll be right back.” He returned quickly with a ham and cheese sub sandwich and a bowl of soup. “I was going to eat this earlier, but I got too busy.” He slid the food across the counter. “You can start with that and I will get you some coffee, too.”

With coffee in hand, Evan returned then waited at the end of the bar while the old man ate readily.

“That was delicious,” he said, pushing the dishes back. “Please allow me to give you something for your hospitality. Will you accept a small gift?”

Evan left his waiting spot, shaking his head. “No, that won’t be neces—”

“Please, I want to. I’d like to thank you for helping me.”

Evan’s shoulders sank when he looked into the man’s soft brown eyes, begging him to reconsider. He nodded in defeat.

Evan scoffed. “I don’t want anything from you.” He picked up the plate and cup. “I was just trying to help you out.”

“I know. That is why I want to give you something. Tell me what you want.”

The tableware made a loud clank as he shoved them underneath the end of the bar.

“Look mister, really, I don’t want anything from you. I just wanted to help.” He closed the distance between them and extended his hand toward the door. “I wish I could do more, but I really have to close up so...”

The old man hopped off the stool and nodded. “I understand.”

Evan guided him to the door.

“Thank you again for the food and drink. Since you cannot think of anything you may want I will give you what you need.”

An eyebrow rose in confusion. “What I need? How would you know what I need?”

The stranger turned to him and took his hand. A warm tingly feeling surged up Evan’s arm when they made contact.

“I know now,” he told Evan confidently. “I will give it to you because you were kind to me when you didn’t have to be.”

Gaps showed where some teeth should have been, but as odd as it looked, the old man’s smile gave him a warm feeling.

The man pulled the door close behind him without a backwards glance, leaving Evan in stunned silence. He stared at the door after the man left and somehow managed to keep his mouth from dropping open.


PURCHASE CHRISTMAS NICK FOR EVERYONE FROM PHAZE AND AMAZON!
Jaxx Steele was born and raised in Brooklyn, New York, but now lives in Indiana. He dreams of buying a house near the beach and writing all day. He has a nine to five, but traveling to wondrous places that can be incorporated into his stories is his passion. Jaxx has love in his life thanks to his life partner, Hou, and their cat, Judo, who graciously lets them live with him what he thinks is his house.
Visit Jaxx online at www.jaxxsteele.com and his blog at www.jaxxsteele.blogspot.com. He's also on Facebook and Twitter under jaxxsteele.
Posted by Cheryl at 4:14 PM