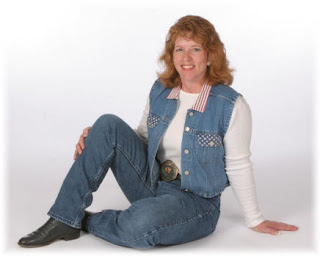 Today we welcome back author, Sherry James to talk about her latest novel in the Studs for Hire series, Woman in Charge, which was released by Black Velvet Seductions this month. The first book in this series, Woman on Top, is also available, as is Sherry’s novel Cowboy Fling. Check out Sherry’s website at http://sherryjames.com/ for details.

Welcome back, Sherry. It’s great to talk to you again!

It's great to be back, Cheryl! Thanks for having me again.

Let’s start off by giving folks a brief overview of who you are, what you write, and what you do in your spare time.

Well, I write both contemporary and historical romance, however, at this time I just have contemporaries in print. I'm working to change that, though! I've also written more than 85 magazine and newspaper articles, and have been a winner/finalist in a number of writing contests. I've lived in the rural Midwest all my life, am a former rodeo queen, love horses, still have horses, and am married and have two kids. What do I do in my spare time? Write! With two kids I don't have much spare time, so I squeeze writing in every chance I get. I also love to ride and work with the horses, and spend time with my husband. Oh, and I love to do research. I love to dig through old courthouse records and books, traipse through cememteries, and visit historical locals.

I was just looking at my calendar. Was it really September when we talked last? What have you been up to since then?

Yes. Time flies! The last few months have been very busy. One major event was getting our son started in Kindergarten this fall. Having only one chld at home all day now has helped in the writing department, let me tell you! But the last few months have been tough, too. My dad had been very ill for a quite some time and he passed away during the middle of November. I'm just now getting back into a somewhat normal routine. If you can call it that. Things will never be quite as normal again. There's hardly a moment that goes by that I don' t think about him. He was a writer, too, and he loved to do research as well. He was not only my father, but my friend, a fellow writer, and my walking encyclopedia! I miss him terribly. But I keep pushing forward. He was so proud of me and all I've accomplished. He wouldn't want me to give up on my dreams. 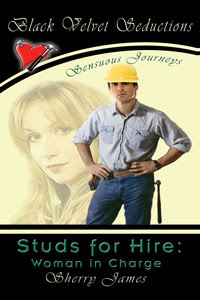 So that readers can get a feel for your Studs for Hire series, can you tell us a bit about Woman on Top?

Woman on Top is the first book in the series. I should mention that you don't have to read the books in order. They are meant to stand alone. But I think readers would enjoy them more, and get a better feel for the characters if they are read in order. Woman on Top is Sydnie's story. She is the brains behind Studs for Hire.

If I remember right, each book in this series will focus on one of the three friends who owns Studs for Hire. Who is Woman in Charge about?

This is Casey's story. She is the accountant for Studs, but she also has a flare for design and color. 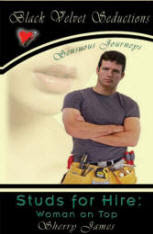 When we first meet Casey in this novel, she’s having a horrible day. She’s soaked from the rain; she smashed her leg on a car door; lost her favorite lipstick, and she knows it’s all because she’s a wreck over the man she is waiting for at Eppley Airport. Is Casey feeling a bit vulnerable when readers first see her?

Yes. Which is unusual for her. She's normally pretty cool, collected and in control. But this day, everything around her is totally out-of-control.

Things go from bad to worse (you were so mean to this poor woman). She’s waiting for a high-dollar Denver architect who could make or break the future of Studs for Hire and she gets accosted by an elderly pervert. Even though he is a minor character, I found him funny and sick all at the same time. Is there anything we should know about him?

Ha! Making life tough for our characters is what we writers do. If their lives were easy, it'd make for a really boring story for the reader. As for the old man in the airport, you'll just have to keep reading to figure out what the deal is with him. ;-) Sorry. I can be ornery, too. Where do you think my characters get it from?

A tall, dark-haired stranger ends up coming to Casey’s rescue and this is where we get our first glimpse of Alex Roy, the man Casey has been waiting for. What can you tell us about him?

He's hot! Sexy! And Yummy! Need I say more? :-) Well, okay. I'll say a little more. Alex is struggling to rebuild his reputation as a respected architect after his former female business partner took him for a major ride. He's a little gun-shy, but determined to get his feet back on the ground. And what Casey is about to offer him isn't in his plan.

And you know I can’t resist asking, what does Elvis have to do with this whole story?

Well, Elvis is the catalyst that brings Casey and Alex together, the reason they're business association almost never is, and the tie that binds them in the end. When I first started plotting this story several years ago, I knew I wanted to include Elvis in the story, but I had no idea he'd take on such a big role. I was an Elvis fan as a kid, and getting to revisit my inner Elvis was a blast. I dug out all my old LPs, books and clippings I'd saved, and it was fun to look at and enjoy them again. As I was writing, I decided I need to be able to hear Elvis, too. Since we no longer have a record player, I couldn't listen to my LPs. So I went out and bought some CDs. Oh, man. As I wrote, researched, watched DVD's of his concerts, and listened to his songs, I was captivted all over again by his amazing talent and chrisma. And you know, the '68 Comeback Special where he's dressed all in black leather? Whew! Can you say hot! At age 33, Elvis looked better than ever. Needless to say, Elvis demanded a bigger part in the story. And he got it! Who am I to tell the King no?

Tell us where readers can purchase a copy of Studs for Hire: Woman In Charge.

What’s up next in your world? Have you begun working on the third book in this series yet?

Yes, I have. Well, mainly plotting so far. Book three, Woman to the Rescue, will be Terri's story. I need to have it into my editor by the end of April in order to see it released in late 2008. I'm also trying to squeeze in the sequel to Cowboy Fling. I've had some really great reviews on that book and I want to get the sequal written and into Ellora's Cave very soon. Country Fling will be Dorie's story. And hopefully, it'll be out sometime in 2008 as well. But I need to get busy, busy, busy!

Yes. Right now I'm holding an Elvis contest on my web site. I'm giving away an autographed copy of Woman in Charge, Christmas Chocolates, and an Elvis Guitar ornament. All readers have to do is stop by my web site, http://sherryjames.com/, read an excerpt and answer a simple question. They can also check out how they can get their name in the drawing twice. I'm also blogging, or at least trying to, over at http://www.sherryjamesromanceauthor.blogspot.com/.

Thanks for coming back to tell us all about your latest release, Sherry. I hope we’ll see you again when book three comes out. I wish you the best of luck in all you do.

Thanks so much, Cheryl. I appreciate your support! Happy Holidays everyone!
Posted by Cheryl at 5:37 PM