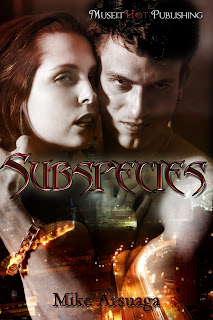 With Samantha “Sam” Johnson, Dr. Jim White, a 130-year-old Vampire, has the best sex of his life and it’s a shame she had to be his next victim. But she had a surprise for him. As a Lycan, she hunted him as he hunted her. After discovering each other’s secret, they cannot resist the physical attraction. Together they hunt and reach out to others of their kind using technology to form a support group. Sam and Jim become the first Lycan/Vampire pair bond.

As a mathematics professor and man of science, Dr. Jim rejects the ways and lore of old in favor of modern solutions that, if not acceptable to humans, allow Lycans and Vampires, The Subspecies, to live invisibly, because discovery is their worst fear.

The Subspecies are a mutation within the human genome. No more than 700 have been alive at one time. They cannot breed with humans or within their own group, but when the Sam and Jim get in a family way, a universe of possibilities opens for not only them, but all of The Subspecies with the promise of their lives being more than hunting, living in shadows, and fruitless mating.


She jerked away and almost instantly returned to human form. For a second, I panicked, thinking I compromised myself in response to a sophisticated illusion. Her demeanor, however, quickly set me straight. I had witnessed the real thing.

“What the hell are you?” she demanded.

“I could ask you the same thing,” I answered between rips at one of the scarves holding my tethered arm.

She pointed at me. “You’re a…” She couldn’t say the word.

I finished the sentence for her. “I’m a vampire.” I freed the other arm.
“I didn’t think you guys existed,” she said with bemused wonder. “It seemed odd when the first cup of tea didn’t put you down right away. To be safe, I tied you up.”

For a few seconds I smiled inside at the irony of the situation but, remembering she tried to hunt me, my manner hardened. “What the hell did you think you were doing?”

“Probably the same thing you did. A girl’s gotta eat.”

I couldn’t help laughing. “Okay, so what do we do now?”

She jerked a thumb in the direction of the bed. “Well, since we’re pretty good there, I think we can work something out.”

“Do they marry or have relationships with one another or with humans?”

I thought again of Lois. “I would think vampires don’t marry in the sense you and I understand it. ‘Mate’ is the term they use for spouse. A ‘pair bond’ represents their equivalent of marriage. Of course in a relationship with a human they would use the conventional human terms: woman for female, spouse for mate. That sort of thing. To answer your next question,” I continued. “No, vampires cannot breed with humans or one another. They are as sterile as mules. In fact propagation is one of the vampire’s great quests.”

Her interest had settled into the routine assimilation and recording of facts, but now her eyebrows suddenly rose. “Great quests?” she asked with new interest.

“Yes. In my theory, they have two imperatives. These are to propagate, and to integrate with human society. They have almost given up on the first since no young have been conceived in all of their history, spanning probably several millennia, but there is hope for the second through improved feeding methods and other advances. The Holy Grail is to find a substitute for human blood, removing the need to hunt. It’s every vampire’s dream.”

For sure, I wanted nothing more. The new methods of feeding had allowed us to blend. As long as we changed identities every twenty years or so and stayed smart with hunting we could expect to live out our lives in relative safety, albeit in isolation. Most of us wanted more. We dreamed of living side by side in full disclosure.

I cleared my throat uneasily at having so amateurishly slipped up. She distracted me so completely. “Yes, of course. These are theories only,” I hoped the reply didn’t sound hurried. I didn’t need a wannabe female Van Helsing snooping around in my life. A mushy feeling of relief spread in my chest when she moved on to another question, apparently losing interest in the issues surrounding our coexistence with humans.

“If there are so few of them and they are scattered all over the world, how do they find others of their kind to pass on knowledge? How do they learn what–uh–who they are?” She asked.

I smiled at her, relieved and newly confident she suspected nothing. Once again, I surreptitiously pored over the well-turned little body while I prepared to answer “Of course all I have told you is fantasy, but to flesh out the illusion I surmise vampires have a way to sense another's presence, possibly through scent. The older ones seek out and mentor the young whenever the opportunity presents. The process is random and unreliable. Until well into the twentieth century practically all of them lived and died as misfits or outcasts without ever meeting another. The coming of the Internet made finding others much easier and more successful. Through it, the Internet, knowledge passed more efficiently and mentoring improved.”

Sam took more notes, nodding in agreement. “It makes sense.” Her eyes locked with mine. “So Dr. Jim, if this were all true doesn’t it mean you are one of them?” She sat back and awaited my answer with an appraising expression.

I played dumb. “Yes, I suppose. If it were true,” I answered, carefully watching her reaction.

After a tense second she threw her head back, exposing a delectable throat, and laughed. “As you said, it’s all a theory.”

My mood relaxed, certain she did not suspect. “More tea?” she asked rising partially erect to pour. For the first time I caught the full range of her scent.

She broadcast a definite receptiveness to my overtures.

I am no glamour boy but I get my fair share of second looks from women. I am a shade over six feet and around two hundred pounds. My legs and arms are long for my body. These are coupled with narrow hips gradually angling to wiry but square shoulders, what Lois used to call a matador’s build. I have a long thin face with sharp features except for the knobby nose. I wear reading glasses now and tend to peer out at the world over them, giving my face a semi-permanent inquisitive wide-eyed expression like an owl. All placed under a head of–thankfully–still thick and glossy brown hair. Women frequently tell me they would kill for it.

We returned to the discussion of vampires and spent another hour filling in my “theories”. As it turned out I didn't need scent to estimate the strength of her interest. She made it clear by what she did during my visit, such as giving the view I avoided taking when she stood at the top of the ladder. Upon setting down the antique tea set she bent sharply away from me. Her skirt rode up from behind. Thighs, indented at the apex, created a diamond shaped opening through to the skirt material on the other side. A sliver of white cloth furrowed the prominent but narrow cleft between the hard globes of her butt cheeks, and expanded into a triangular pouch filled with her intimate flesh and its promise of paradise.

She turned in a blur and faced me. The candlelight behind darkened her hair to a light burgundy. Her smile gleamed from a shadowed face. “You’ve been very patient and helpful, Dr. Jim.” Taking my larger hand in her much smaller one she coaxed me to my feet.

“Where are we going?”

The bright perky face in the full candlelight smiled, “To show you the rest of the apartment.” Pulling my hand with a surprisingly strong grip, she led us to the bedroom.
Warning: Graphic violence and strong sexual content. Must be 18 and over.

SUBSPECIES BY MIKE ARSUAGA IS COMING SOON TO MUSEITUPPUBLISHING.COM! 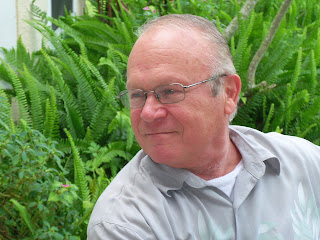 
Mike’s extensive travels in the Navy took him throughout the US, Canada, Europe, the Caribbean, and the Middle East, providing accurate and vivid settings for his stories.


Subspecies and Subspecies, Inc. are scheduled for release in May and September 2011 from Muse It Hot Publishing. You can visit Mike online at http://mikearsuaga.weebly.com/