Author Spotlight: Sherry James and The Cowboy and The Hellcat 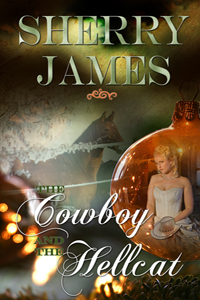 Gun toting Ellie Merrick prefers buckskin and boots to satin and lace. Adam Ford doesn't want to take a bride, especially one who knows nothing about being a proper wife. But when Adam learns he must marry Ellie or lose his share of the 4 Aces Ranch, he also discovers the Hellcat has captured his heart.

The Cowboy And The Hellcat

is Book #1 of The Cowboys of the Four Aces series by Sherry James.


Shot in the back by a thief for a measly fifty dollars and a Colt 45, Jack Ford’s body had been left to rot in the buffalo grass like some mangy, worthless coyote. And now he was buried deep in an unforgiving hole, the ancient prairie sod on top disturbed and left in clumps thickening into mud from the autumn rain pounding mercilessly from gray skies.

It was all such a mockery—the senseless killing, the abandonment, the abrupt decline of the weather—to the strong, proud man his father had once been. At least justice for Jack Ford had been swift. The sheriff had told Adam just hours before his father’s funeral, thanks to vigilantes; the thief had faced his punishment for the crime at the end of a rope that very morning at dawn. The residents of the county taking the law into their own hands probably wasn’t the right way to handle the situation, but Adam felt a sense of relief anyway. Frontier justice had offered a quick remedy, putting an end to the weeks of waiting for the circuit judge and a trial.

Feeling more exhausted after the long day of the funeral proceedings then he did after a day spent on the range rounding up strays, Adam stripped off his black suit coat and tossed it over the back of a chair. He yanked on the end of his tie and opened the stiff collar of his best Sunday shirt, ready to shut out the events of the last few days.

Filling a glass with a tall draw of whiskey, he took the bottle and slumped into the hard cushions of one of his mother’s matching chairs flanking the fireplace. He stretched his legs toward the flames in another useless attempt to banish the chill encompassing his body, but the stiffness of the chair only accentuated the cold and intensified the ache in his muscles.

After sitting quietly for a few moments, the plink, plink, plink of rain hitting against the windows registered in the back of his brain, rivaling the tick of the mantel clock and the snap of the flames in the grate for the most annoying sound in the room.

His fingers tightened around the glass as he brought the crystal to his lips again. Downing a long draw he swallowed slow, letting the liquid burn his throat, hoping the fire of the whiskey would mask the pain squeezing his chest.

Solemnly, he watched as the fire’s flames leaped along the logs, casting long shadows on the study walls. He dropped his gaze to the amber liquid left in the glass and realized neither the fire nor the whiskey would take away this chill. This emptiness.

Time would warm his soul again. Or so his mother had proclaimed in her strong, compassionate way. But Adam wasn’t convinced.

And time sure as hell couldn’t take away the injustice of his father’s murder.

A knock sounded on the door behind him. Adam cursed, in no mood to accept any more condolences today. The knock came again, this time louder, more insistent.

“Come in,” he growled, not bothering to get up from his seat. Instead he grabbed the bottle off the side table and refilled his glass. He heard the door open and shut with a soft click. Heavy, shuffling footsteps followed, telling him his visitor was a man. The steps stopped short. Not a word was spoken. Knowing he couldn’t avoid his guest forever, Adam rose and turned toward the source of the intrusion.

Sherry is running a contest through the end of November. One lucky winner will take home a free e-Copy of The Cowboy and the Hellcat. All you have to do is visit Sherry's website at http://sherryjames.com/ and go to her contest page. Read the short excerpt--the same one as you find above--and answer a question.

There's a link on Sherry's website where you can email her your answer. A winner will be selected from all correct answers received. 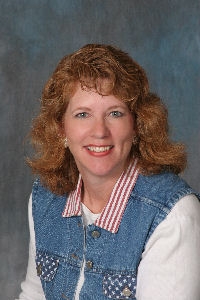 Sherry James is the author of Cowboy Fling, the "Eight Seconds" novella featured in the Ellora's Cave Flavors of Ecstasy, Volume 3, and her most recent release, The Cowboy and the Hellcat. She is also the author of the romantic comedy Studs for Hire series.Having lived in the rural Midwest her entire life, James is a former rodeo queen and horse lover. She is married and has two kids.

In addition to her website, you can find Sherry online at http://www.sherryjamesromanceauthor.blogspot.com/.
Posted by Cheryl at 4:03 PM