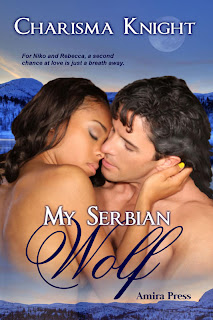 Niko sacrificed himself once for the sake of his pack, but will he discover another lesson of self sacrifice that may release him from his spiritual imprisonment?

Centuries later, he discovers his life mate, Rebecca, the one who can make him whole once again. For Niko and Rebecca, a second chance at love is just a breath away.

Clutching the bed furs, Rebecca shivered as she returned to the warmth of the bed. The cold air hardened her chocolate nipples, causing the silk to feel harsh against them. Candles adorned the room, and a slight breeze caused the flames to sway in a smooth fluid motion, in such a strange hypnotizing way. It was no secret, once again she'd been thrust into an alternate reality.

A growl made the hair on the back of her neck stand on end. Chills skittered down her spine, causing goose bumps to erupt over her flesh.

The bed sat adjacent to the entrance of the room, and within the door- frame she caught a glimpse of Niko's large silhouette. From what she could see, his eyes appeared to be silver, or perhaps the candlelight played tricks upon her eyes.

Seeking more warmth, Rebecca tucked the furs closer to her body. Her breath escaped her as the wolf man moved closer into view, leaning against the stone wall. Silver eyes pierced her soul, and her pussy clenched in anticipation. Hot cream flooded her silk panties when Niko finally came into full view, snatching her breath away like a thief in the night.

She smiled. "I've missed you. Her pulsed quickened, and her clit throbbed. She ached with want at the thought of his hardened body slipping and sliding against hers.

Rebecca swallowed hard as the large, muscular man, who stood at six-foot-three appeared to float into the room. Every time Rebecca saw him, many memories invade her psyche, causing her to remember their past lives together. Tonight, he wore a blood red wool shirt, and black cotton knickers, that were pretty damned form-fitting against his chiseled body.

His features appear to be carved from stone and adorned with tell-tale signs of his age, sending her blood pressure through the roof. To Rebecca, he looked to be in his early to mid forties, but she knew Niko was centuries old. Gray streaks were prominent throughout his black, shoulder length hair. Rebecca shuddered, not from the cold, but from eyes that were now black as obsidian. She released a breath and shuddered in anticipation of what was to come. Those eyes possessed ancient unspoken secrets, and promised hours of forbidden carnal pleasures.


Charisma Knight lives in the Maryland area with her darling daughters and her overactive imagination. Her love for vampires prompted her to pursue writing in March 2009.

Vampires are her first love. Werewolves, ghosts, and dragons follow close behind. She writes of old or “cursed” souls who are reincarnated over the sands of time. Quite often these souls must atone for past sins they care not to remember before fulfilling their destinies.

You can visit Charisma online at http://charismaknight.yolasite.com/
Posted by Cheryl at 8:54 PM