Kathye Quick on Romance and Cynthia and Constantine 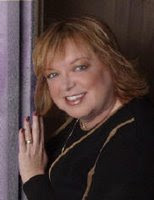 Today's guest blogger is Kathye Quick. Kathye has been writing since the sisters in Catholic School gave her a #2 pencil and some paper with ruled lines.

From stories about her family for Writing Week in fifth grade, to becoming editor-in-Chief of her high school newspaper, The Blueprint, to 1999 when she realized her dream of being published, Kathye’s love of the written word span numerous genres.

Kathye is one of the founders of Liberty States Fiction Writers, a group launched in January 2009 to help writers of all fiction genres in their journey to publication. She has been a member of New Jersey Romance Writers and Romance Writers of America since 1988 and considered it an honor to have been NJRW President in 1992 and 2001.

In her “other” life, Kathye works for Somerset County government. She is married with three sons.

Kathye will be talking about the different subgenres of romance she writes and telling us about her latest release, Cynthia and Constantine (The Wild Rose Press).

When I began to write, I was told to write the book you want to read. What came to mind almost immediately was a book on the wonderful myths of the Greek gods and goddesses.

A little back story of my own - when I was in seventh grade (I lived in a small town and the 7th and 8th grade shared a building with the high school), I was going up the steps to my class one afternoon when a horde of kids, all dressed in robes; the girls with flowers in their hair, the boys with crowns of twigs, came flying down the steps. I moved to one side to let them by, fascinated. They were laughing and talking and headed outside to the courtyard. Behind them came a beautiful lady all dressed in black, but also with flowers in her hair. She looked at me and smiled and I knew I would never forget her eyes. (I never have.)

Later I found out it was the high school mythology class celebrating the Ides of March. From that day on I was hooked on the myths and legends. I could not get enough of them.

When it was time to write my first novel, I wrote DAUGHTERS OF THE MOON, a Greek historical romance. But that was in the early 90’s. It was a 100,000 word novel of love that no one wanted to even look at back then.

Still I persisted in sending it out until I finally had to give up when one editor specifically said no books set in ancient Greece during a talk. I knew she had to be talking about me. Maybe she was, maybe she wasn’t, but I put it away for a while and switched to contemporary romance.

While my heart was always in Greece, I did rather well writing and ultimately selling contemporaries. My first ONE RAINY NIGHT sold to an eBook house in 1999, back in the day when eBooks had just been born. That particular house is no longer in business, but ORN has found a home with Wings ePress.

And in 2003, so did DAUGHTERS OF THE MOON, I am happy to report. DAUGHTERS been heralded as a fascinating glimpse into the world of the ancient Greeks and has garnered 4-star reviews. I would like to think I helped break that ground because now there are plenty of Greek gods and goddesses living on bookstore shelves now.

While my contemporaries are alive and well, I have a three-book series coming out this year from Avalon Books, I still love the old days, especially ancient Greece and also the Arthurian Legend.

I have always loved the adventure and story lore of Camelot. When I was a very little girl, and I know I’m dating myself now, there was a black and white television program on called “Tales of Sir Lancelot.” I watched it religiously. I wish I could find it now just to have on DVD to reminisce. 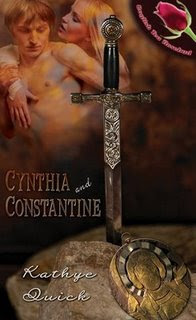 I chose to write CYNTHIA AND CONSTANTINE, a story from the Arthurian time because it is so much a part of me. I could watch Camelot with Richard Harris every day.

So now I find myself writing in many genres – contemporary, romantic comedy, historical and even urban fantasy (as P. K. Eden with writing partner Patt Mihailoff from RWA-NYC). I know we, as writers, have been told to stick to one genre, but I can’t seem to do that. There are too many people and stories in my head. I have to get them all out of there.

Thank heavens for Bluetooth. When I’m talking to all those characters, people just think I’m on the phone!

Thanks for having me today. If you have time, please visit my website at http://www.kathyequick.com/ or my alter ego P.K. Eden’s at http://www.pkeden.com/ and you can check out the different stories I have managed to get out of my brain.

Lady Cynthia of Abertaine is trapped. Not only has her fiancé, Sir William Leyborne, not been back to the castle for over ten years, but she’s also not a titled Lady. Lord Simon of Cowell, a renegade warlord aligned with Mordred against Arthur and his Knights, has declared himself sovereign over Leybourne Castle and everything that once belonged to Sir William--including Cynthia.

Sir Constantine, Knight of the Round Table, has come to the shire to give Cynthia the news that her fiancé has fallen in battle. With him is William’s oral will giving all he owns to Cynthia as though they had been wed. But when he finds Cynthia and discovers the shire under the control of an evil warlord, he knows he cannot leave without first driving Simon and his soldiers from the land.

Drawn together by an attraction older than time, Cynthia and Constantine soon discover that though a vow made by a knight’s honor has brought them together, it may just also cost them their lives.