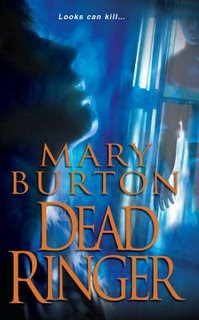 Richmond detectives Zack Kier and Jacob Warwick find themselves investigating a killing spree by a strangler who manages to leave no physical evidence. All they find with the bodies are simple charms, each bearing a different woman’s name and an uncanny resemblance to local television anchor Kendall Shaw. On the hunt for a story, Kendall manages to dog their every step as they struggle to find pieces to the deadly puzzle. She’s determined to keep investigating the murders and not just because she’s been stuck behind the anchor desk too long. It’s because, eerily, clue after clue strikes a chord with her. She’s certain that something in her past holds the key to stopping the killing--and Jacob agrees. The more the two dig into the victims’ backgrounds, the more terrifying the discoveries, and the more certain they both are that Kendall is the ultimate prize.

Richmond Detective Jacob Warwick was great fun to write. He is my modern day warrior who stands over six feet two inches, has broad shoulders and has military short hair. At first glance he comes off as a hard, unfeeling guy, but as they say, “Still waters run deep.” Jacob was raised by a single mom who was an alcoholic and drug addict. She had little time for Jacob and as a consequence he started getting into a lot of trouble. When he was twelve he egged a local boxing gym and to his surprise the owner chased him down and made him clean up the mess. The old guy, Pete, took a liking to the headstrong Jacob and when he realized the boy was in a bad home, took the twelve year old in as his foster son. Pete was a great father to Jacob and introduced him to the world of boxing. Jacob took to boxing and even became Golden Gloves. He served time as an Army Ranger. He joined the police force after the army and earned his college degree at night. He quickly established himself as a tenacious, driven man who was willing to put in long hours. He has little patience for excuses and if he has any biases it’s a deep distrust of people with substance abuse problems. This mind set proved to be a problem when he was paired with homicide detective Zack Kier, a talented cop who is also a recovering alcoholic. It’s taken over a year for Zack to win Jacob’s trust but the two have forged a solid friendship.

However under Jacob’s steel façade is a different man. That man deeply mourns the loss of his foster father. He fears failure or letting those around him down. And that man harbors deep feelings for news anchorwoman Kendall Shaw, a striking elegant woman who frustrates him at every turn and invades his dreams at night.

Mary Burton confesses to a baking addiction and a fascination with the people who hunt serial killers. The former is genetic. The latter began during the twenty years that the Southside Strangler, D.C. Sniper and the Hampton Roads killers stalked her home state of Virginia. These killers terrorized residents and claimed twenty-six victims before their capture

Why did they kill? What demons drove them? How did they choose their victims? Burton’s questions led to inspiration and the USA Today best selling author began developing the characters whose horrific assaults would drive the plots of her romantic suspense novels I’M WATCHING YOU and DEAD RINGER.

Her commitment to realism in her writing has led to eye-opening interviews with local law enforcement, forensic seminars and the firing range. She is a graduate from the Henrico County Citizens Police Academy and attended Sisters in Crime’s three day Forensic University program.

A Virginia native whose family’s Richmond roots run as deep as the nation’s, Burton graduated from Virginia’s Hollins University and began a career in marketing. After a decade she decided to do something about the myriad stories buzzing around her brain, which seemed to dare her to try to write them down. She took up the gauntlet, left her job and began her first novel. That very first manuscript, a historical romance, was published in 2000.

After selling her first novel, Burton wrote eleven more books for Harlequin and four contemporary romantic suspense novels for Silhouette before entering the dark world of multiple murderers and their motives. Once there, she wrote her romantic suspense novels I’M WATCHING YOU and this November’s DEAD RINGER, both published by Zebra Books. Her novella Christmas Past appears in the 2008 holiday anthology SILVER BELLS along with stories by New York Times best selling authors Fern Michaels and Joann Ross, and award-winning novelist Judy Duarte. Previously her story Snow Maiden was featured in the USA Today best selling anthology A Hero’s Kiss.

Born and raised in Richmond, Mary Burton is an avid cook as well as baker, and even volunteered as a kitchen assistant at a local culinary school to hone her skills. When not writing and researching she can be found hiking, doing yoga and playing with her miniature dachshund puppies, Buddy and Bella. Currently, she is working on her next novel.

The DEAD RINGER VIRTUAL BOOK TOUR '08 will officially begin on November 3 and end on November 26. You can visit Mary's blog stops at http://virtualbooktours.wordpress.com/ in November to find out more about her latest book!
Posted by Cheryl at 8:03 PM