Victoria Wells on Creating Sensuality in A Special Summer

Our guest blogger today is multicultural romance author, Victoria Wells. Her novel A Special Summer came out earlier this year. 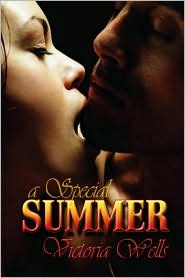 In love with the man of her dreams, Summer Jackson is living her life in sheer bliss…so she thought. Devastation rocks her world when handsome Nick Stiles walks out on her, leaving her to pick up the shattered pieces.

As days, weeks, and months fade into the future, Summer is forced to push thoughts of loving Nick far from her heart and her mind. Thoughts that may possibly threaten to expose the secret she’s hiding.

Out of the blue Nick resurfaces with intentions of reclaiming Summer as his woman. That is…until he is confronted with a betrayal that is so insurmountable he finds himself in a blind rage, hell-bent on revenge.

Will Summer’s need to protect her secret destroy any hope she has of being in the arms of the only man she’s ever loved? Is Nick willing to forgive Summer for her acts of betrayal and deceit? Will this once passion filled love survive such treachery?

Victoria shares with us today how writers can create sensuality in their work. Here's what she has to say:

What is Sensuality? How is sensuality created? When one thinks of sensuality it may be assumed that it’s anything of sexual context. This definition however is contrary to what Webster has to say on the subject. For Webster defines it as being devoted to the pleasure of the senses.

Because sensuality is the hallmark of romance novels, I knew it was imperative for my characters Summer and Nick to possess this trait. In creating this atmosphere between the two, my desire was to have it be of an intimate nature and not one of lust.

Out of all the beautiful women in the room that night, Nick’s sense of sight gravitates him to one particular woman. It was Summer’s aura that had him captivated the entire night solely based on her physical attributes and demure demeanor. Whereas Summer’s senses of touch and smell were assaulted when she literally collides into Nick. Her equilibrium became off kilter when her body experienced foreign sensations as she inhaled Nick’s cologne while enveloped in his intimate embrace.

As an avid reader of romance for several years, I would like to think I’ve developed my own definition of sensuality. It’s that magnetic pull between the hero and heroine that sets them on a their romantic journey. After Nick and Summer’s initial meeting the sensual element of the story is enhanced by Nick’s pursuit of a shy, interested, yet unwilling Summer. The premise of the story is not a rushed romance where the couple has sex and fall in love in three weeks. The reader gets a sense that Summer is wooed and courted by Nick for months before the relationship is taken to that level of intimacy. Attributes of tenderness and patience are what draw the young beauty into his sensual web.

As an African American author writing about African American characters I felt it was my responsibility to portray that, which would appeal to anyone’s sensual nature. It was important to me that my characters demonstrated feelings and emotions that went beyond the physical. My yearning is that anyone who reads A Special Summer comes away with the notion that Summer and Nick feel in love with what they represented as their true selves. What can be more sensual than that?

A Special Summer is available at Amazon.com, Barnes and Noble.com, and directly from the publisher.

Victoria Wells is a Philadelphia native who has been an avid reader since childhood. Wells (Gaye Riddick-Burden) earned a Bachelor’s and a Master’s degree in Nursing from La Salle University. Over her seventeen-year career as a nurse, Wells (Riddick-Burden) has written, lectured, and presented at national conferences extensively on sickle cell disease. Her dedication to caring for patients with this disease earned her the Regional and National 2005 Nursing Spectrum’s Nurse of the Year Nursing Excellence Award in Clinical Care.

Using writing as a tool to escape the hassles and worries of everyday life, Wells decided to pen a novel. In November 2006 she released her self-published debut romance novel, A Special Summer. After receiving positive feedback and believing her story portrayed strong, intelligent, self-sufficient African American characters dealing with and working through relationship issues, Wells decided to submit her manuscript for traditional publishing. In August 2007, Xpress Yourself Publishing made an offer to re-release A Special Summer, March 4, 2008.


A SPECIAL SUMMER VIRTUAL BOOK TOUR '08 will officially begin on June 1, 2008 and continue all month long. If you would like to follow Victoria's tour in progress, visit http://www.virtualbooktours.wordpress.com/ in June.
This virtual book tour has been brought to you by: