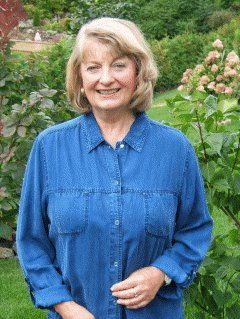 Today we are featuring author Maureen Fisher. Born in Scotland, Maureen immigrated to Canada at the age of seven. Maureen spent many years in the business world working outside of her home, but traded in her power suits and panty hose so she could concentrate on writing. Maureen and her husband live in Ottawa, where she volunteers for an addiction family program, plays bridge, and slaves over her computer to improve her writing skills.

I think she hit her mark! 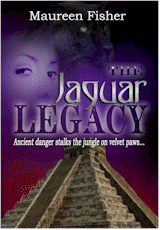 What if she had lived before? What if she had created a legacy of betrayal that spanned several millennia? What if passion could heal her soul and love could release her from bondage?

THE JAGUAR LEGACY is a vivid story of romance and humor, peril and suspense, betrayal and trust, healing and absolution.

Despite baffling panic attacks that devastated her career, journalist Charley Underhill barges in on a Mexican archaeological dig, bent on sniffing out a juicy exposé that will restore her reputation and earn enough money for her mother’s life-saving treatment. Haunted by past betrayals, Dr. Alistair Kincaid isn’t about to let a smart-mouthed reporter leak word of his latest discovery, an ancient Olmec city, to the press. A battle of wills and wits ensues. Strands from a past life intertwine with the present, drawing the couple into a vortex of chilling evil. Torn between redeeming her soul and betraying the man she loves, Charley faces impossible choices.

Look for The Jaguar Legacy at:


This virtual book tour has been brought to you by: