It’s about to get hotter in here. Joining us today is author C.J. Maxx. C.J. has written military citations and efficiency reports, articles for trade journals, and his work has appeared in newsletters for volunteer organizations. But that’s not what we’re going to chat about today. Get your fans ready, because C.J. is going to tell us about his novel Coming Back a Virgin, which from this book’s synopsis is going to be a real hot one. We’ll also discuss his writing process and his feelings on censorship.

Welcome to my blog, C.J. It’s a pleasure to have you with us.

Thank you for inviting me. It's my pleasure.

Let’s get started by finding out more about you. How long were you in the military? How did this career lead into your fiction writing? Do you have a preference--writing fiction or nonfiction?

I was 17 on a Friday and in the Army the following Monday. By Tuesday I knew I made a mistake but it was too late. It was a slow process but I adjusted and spent 21 years in the Army.

I was a writer before I joined the military so what the military gave me was life experiences to write about, especially combat.

I prefer fiction. Writing non-fiction is not unlike writing term papers in college, you know. You have to keep your facts straight and be objective. In fiction, it just needs to be plausible. Fiction's much more fun.

Can you tell us what your writing process is like? Do you write every day? Is there a time of day when you are more productive than others?

When I'm working on a book I'll write Monday to Friday and take the weekends off unless I'm deeply involved with a scene or chapter. I'm a morning person. I normally wake up between 3 and 4 and have from then until my two lovely granddaughters get here about 8:30 to write. Now, that time includes coffee with my wife, watching the weather forecast on television and having breakfast. Once the girls get here, little gets done that doesn't involve them. We homeschool them. 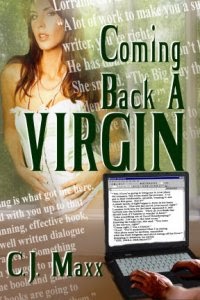 Let’s talk about Coming Back a Virgin. This novel seems to be a departure from your other books, which involve some type of military or government agency. Why switch gears now? Were you concerned this might alienate some of your readers?

You’ve developed an interesting plot for this story. A fictional character named Lorraine is given the mission to teach author Walter Riggins how to write romance in a meaningful and entertaining way instead of his usual pornographic style. Where did this unique idea come from?

My first book was a political thriller that never made it into print because the publisher went out of business. The sex scenes in it weren't very good. My wife and multi-published mentor thought they were gratuitous too. I'm a romantic so I know romance. I just couldn't put it down on paper. I can now.

Walter ends up physically desiring a person that he created on paper. How did you develop this relationship to make it meaningful for the reader? Do you believe readers can care enough about what happens to a fictional person to keep reading until the last page?

It's nice to write fantasy because you can have your characters do things that are not possible normally. Lorraine becomes more real as the story goes on. Her transition and Walter's lust turning into love carry the story and hold the reader's interest. The last part is my favorite, her coming back as a virgin. That wasn't in the original story.

I think readers very much identify with fictional characters. That's why they love fiction. Fiction's an escape. Romance's will always have a large following because of the happy endings. Just like in Coming Back a Virgin.

Two other characters are mentioned in the excerpt of Coming Back a Virgin posted at your website - http://www.cjmaxx.net/virgin.html. What can you tell us about Samantha and Papa H?

I write from a vague outline in my head so they were never in my thoughts until I wrote about them. Papa H. is supposed to be Hemingway. I needed someone to be in charge 'up there' and I couldn't think of anyone better. Samantha just appeared in that scene so that Walter could make his comeback about Papa H. liking his writing.

Where can readers order Coming Back a Virgin and any of your other books?

The URL for the Virgin book is:

That's the only book available at this time.

I’m going to move away from your book to discuss something that I feel very strongly about. There are groups out there who would seek to ban books like yours. How do you feel about that? Do you think censorship is ever justified?

I'm a Libertarian. America stands for individual liberty, that's what this country is all about. Many soldiers have died over the years preventing fascism, communism and now Islamism from forcing their views upon us, dictating how we will live our lives. I don't believe in censorship of fictional works. I don't have a problem with restricting minors but adults should make their own choice. If they don't want to read sexually explicit material, they don't have to buy it.

I’ve known writers who are condemned by their friends and sometimes their churches for writing romance novels. Has something like this ever happened to you? If so, how did you handle it?

No, it's never happened to me.

What’s up next for you? Any exciting projects in the works that you would like to share with our readers?

Mardi Gras Publishing closed so I'm hoping to place my Sex and the Capital series with another publisher, hopefully Whiskey Creek Press-Torrid.

Other than that I intend to rewrite my first novel, the political thriller titled The Second American Republic.

No. I would like to thank you for this opportunity to speak to your readers about myself and Coming Back a Virgin.

Thanks for stopping by, C.J.. May the future bring you continued success.

You're welcome. I sure hope so.


This Virtual Book Tour brought to you by: