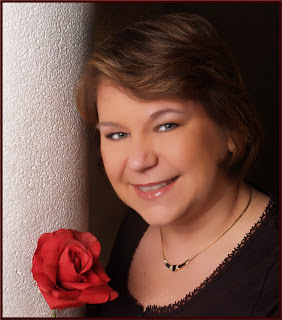 Welcome to my blog, Caridad. It’s a great thrill to have you with us!

It’s a pleasure being with you and spending some time to chat about my books.

Before we chat about South Beach Chicas, let’s find out more about you. I understand you’ve held a love for writing for a long time. How did it start? What else encouraged your desire to write?

I wrote my first book in the fifth grade as part of a class project. From the moment I put pen to paper, I knew that it was what I was meant to do with the stories I had been creating in my head for as long as I could remember. I kept writing over the many years of college and law school, but didn’t really dedicate myself to getting a book published until after the birth of my daughter. I realized then that there were things I had misplaced and dreams that had been put aside. I wanted to find those lost items and rededicate myself to my dreams so that my daughter would understand what was important to me and also, that she could aspire to fulfill her dreams as well.

As I mentioned, after my daughter was born, I realized that I had not accomplished the one dream I’d had as a child – writing a book and seeing it published. Armed with that dream, I created time to write by getting up earlier on the weekends and utilizing the time during my commute to write. It took about six years, but I accomplished my dream. As for whether my background and occupation help, they most certainly do. Since I was a science major, I often find myself relying on things I learned about genetics, anatomy, etc. in my novels. The training for being an attorney involves learning to use logic and building a case from start to finish which is much like creating a rationale story arc. Finally, I am also the technology partner and I often use my knowledge of computers and electronic gadgets in my romantic suspense novels.

Do you have a mentor or a source of inspiration? Are there any favorite authors you strive to emulate?

My mom was my mentor as well as being my best friend. I was always astounded by all that she managed to do and she has always been a role model to me. She instilled in me the belief that I could accomplish whatever I wanted if I was willing to work hard enough to get it. She also instilled in me the desire to always strive to be better and I hope that each book I deliver is better than the last. As for emulating writers, I try to develop my own voice and keep it fresh. However, there are writers who are on my must read list! J.D. Robb, Kim Harrison and Kelley Armstrong for starters. I’m also dying to read J.R. Ward and have one of her books on my TBR pile that I plan to take with me when I go on vacation. 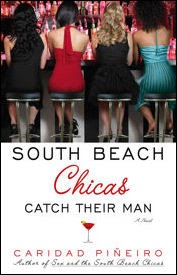 The original book, SEX AND THE SOUTH BEACH CHICAS, is a story about four life-long friends and what happens to their friendship when one of the women elopes. I chose that topic because I think that so many women go through drastic life changes when their friends begin to marry, have children and leave their single friends behind. I wanted to show those changes and I also wanted to show how friendships can not only endure, but grow stronger. I think the success of this first book is due to this universal theme and also, to the fact that so many women could identify with one or more of the women in the book. As for the sequel, SOUTH BEACH CHICAS CATCH THEIR MAN, I just loved Sylvia and her very humorous and sexy mom, Virginia. So did the editors and readers and so we decided to write a book about them, their friendship and the men in their lives. I hope people will like seeing a story which shows a fortysomething in the throes of love and in a very positive light. I also hope they will be uplifted by the very special bond between a mother and daughter who are also the best of friends. I feel the relationship between Sylvia and Virginia is much like the one I had with my mom and that in turn, I have with my daughter.

You’ve described these books as “women’s fiction with a modern edge”. Can you elaborate on that statement?

What’s in a name? For publishers and editors, they like to be able to say, this is romantic suspense or a paranormal or chick lit. SOUTH BEACH CHICAS CATCH THEIR MAN has been named as chick lit by some, but it doesn’t really contain many of the key elements of a chick lit novel, although it has witty dialogue between the women and men. I think the theme of the book is more about relationships – those between friends, mothers, daughters, fathers and lovers. Because of that, I consider it women’s fiction, but the locale, glamour and some of the verbal exchanges give it the modern edge that you might find in a chick lit novel.

South Beach Chicas Catch Their Man focuses on Sylvia Amenabar. She and her best friends--Adriana, Juli, and Tori--have been having a fun time living it up as single women, but now the girls have four sexy men in their lives and Sylvia isn’t sure she likes the way things are working out. Why is this a hard thing for Sylvia to accept?

It was very hard for Sylvia to accept that Tori got married in the first book and that now, Adriana is also in the throes of a seemingly happy relationship. Sylvia has not had a stable male presence since her dad left her mom when she was very young. That has made Sylvia cynical about men and lasting relationships. Those beliefs will be challenged by Carlos, the detective who saved her life, but may damage her heart. Her notions of lasting love will also be challenged by the reunion of Virginia, her mom, with Pablo, her dad. I loved exploring the changes in Sylvia as she comes to learn more about the men in her life and her own family history.

Tell us a bit about Carlos Ramirez--the hot cop who saved Sylvia’s life. Why is she fighting her attraction to him? Why will readers like Carlos and root for him to win Sylvia’s heart?

Carlos is a hero in every way you can imagine. Besides being an undercover detective and believing in doing the right thing, he is strong enough to accept Sylvia, her success and her dreams, even when they may ruin his reputation. Readers will love him because he is honest with his emotions and true to those he believes in. He believes in Sylvia and that she will do the right thing and because of that, I think readers will be rooting for him as well as for Sylvia.

Sylvia’s mother, Virginia, plays an important role in this book. What can you tell us about her?

Virginia Cooke had met and fallen in love with Pablo Amenabar, Sylvia’s dad, when she was just seventeen. Virginia comes from a small Virginia town (yes, she was named after the state of her birth) and her family was white trash and had a hand-to-mouth existence. Virginia worked hard at the stables in the area to not only help put food on her family’s table, but to stow away some money so that one day she could go to college and change her life. Of course, Pablo arrives at the horse farm where she is working and nothing is ever the same again. I’ve actually posted a deleted scene that’s not in the book at my blog (http://caridad.com/blog/2007/09/26/wicked-wednesday-a-sexy-south-beach-mama/) for anyone who wants to see the first meeting of Sylvia’s parents. After falling in love and giving birth to Sylvia, circumstances drive Pablo and Virginia apart. In the years since that separation, Virginia has achieved her dream and is now a very successful realtor in the Miami area. She has had her share of men in her life, occasionally as lovers, mostly as friends. No one has ever moved her as Pablo had and this book is about exploring those lingering feelings once again. I loved showing Virginia as a successful and sexy woman who is in control and reaches for what she wants in her life.

Where can readers get their hands on a copy of South Beach Chicas Catch Their Man?

SOUTH BEACH CHICAS CATCH THEIR MAN is available at bookstores everywhere and also online. It is available as an e-book at the Simon & Schuster website.

What’s up next for you? Any other great books we should be looking out for?

I’m working on a proposal for another CHICAS book featuring Adriana. People who’ve read the earlier books know that Adriana is finally taking a chance with a man she has known for over twenty years and has been her best friend for most of her life. I think many woman have male friends who they wonder about having as more than friends. Because of that, I think Adriana’s story will resonate with many readers. I’ve also got two anthologies out this year --- MOON FEVER (October) and HOLIDAY WITH A VAMPIRE (December). Next year will feature more books in THE CALLING Vampire series, a novella about an Aztec demon and hopefully, more romantic suspense stories and Chicas!

I want to thank you so much for taking the time to chat. Also, if you want to enter my monthly contests, receive a newsletter or contact me, please visit http://www.caridad.com/or http://www.thecallingvampirenovels.com/. Thanks again.

Thanks for joining us today, Caridad. It’s been a great pleasure to chat with you about your work. I wish you much continued success.

This Virtual Book Tour has been brought to you by: