Interview with PG Forte, Author of Waiting for the Big One

The temperature is about to get hotter in here because today PG (it’s a name, not a rating) Forte is going to chat about her latest release, Waiting for the Big One which was published by Liquid Silver Books. This is PG’s first virtual book tour and I am thrilled to have her stop by.

Welcome PG. It’s great to have you with us.

Thank you, Cheryl. It's great to be here.

Let’s find out a bit more about you before we chat about the book. When did you decide to become a writer? Did anyone inspire you to travel along this career path?

I'd say it was more of a challenge than an inspiration. I was working in a re-touching studio in Manhattan when I got to talking about books with a co-worker. It turned out we both had written short stories and poetry, etc. He was really the first person to challenge me to do something with that.

This is the one question I ask everybody because I am so curious about how other writers work. What is your writing process like? Do you write every day? Is there a time of day when you are more productive than others?

I do try to write every day--other than when I'm between series. There's a certain amount of switching gears that takes place when I'm starting a new project, so sometimes there's a little downtime then. But, if I'm in the middle of a book, I have to write on a regular basis. I get cranky if I don't. I even took my laptop with me when we took a cruise to Hawaii a few years ago. I wrote on the deck. Every day. It was lovely.

I also tweak and edit and re-write as I go, so my 'first draft' is usually not very different from my final version. I know some people just write to get something down and then go back and re-write and re-write but that doesn't work for me. Also, I like to plot things out in detail ahead of time. That's very important.

I definitely am more productive at some points of the day than others. When I first started--back when my kids were in school full time and I was driving them back and forth, getting up early, etc, I found my most productive time was during the day. When that changed, I began to stay up later and later. For several years I did all my best work late at night--after everyone else was asleep. Lately things have changed again and now I find I'm doing more work during the day.

I read an article in the April 2007 issue of Writer’s Digest (The Power of Titillation) which spoke of the sometimes blurry line between romance and erotica. Where do your books fit in? Are you happy with that?

And yes, I'm very happy about that. My previous series 'didn't quite fit' into several categories at once--as a result they were much harder to sell. 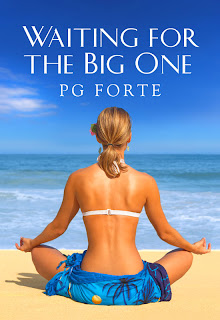 Are you ever asked why you choose to write the books that you do? Has anyone ever questioned why you don’t write something a little less…controversial?

Yeah, my father wishes I'd write something with less sex in it. And my brother once complained that he thought my romantic-suspense would have been better without the romance. I disagree. I tend to let my characters dictate the story and this is how they want it.

My goal is to write stories that I would want to read--and then hope other people share my tastes.

Let’s move on to Waiting for the Big One. Tell us a bit about this book.

Based upon the synopsis, Gabby seems to be looking for love in all the wrong places. Is it hard to create a character like Gabby who might seem superficial to some people? How do you make the reader care about her?

I fall in love with all my characters--I think that's the secret to creating characters that readers really respond to. Gabby is young and somewhat silly but she's also sweet and vulnerable. Even though she makes mistakes, she tries hard to be a good friend. What's not to like about that? Well, other than her penchant to relate everything to Astrology, I guess. Some people have found that tiresome. Unfortunately, that's a character trait she has in common with me--ack! I might have to shut up and never again mention that I'm also a Pisces and my husband is a Scorpio...and our son's a Pisces too.

And, no, despite all that, the book is not autobiographical. lol!

Tell us about Derek, the man who Gabby is friends with. Is she even aware of his attraction to her? By the synopsis he seems kind of possessive. Is he really?

Oh, thank you for asking about Derek--I think he's just so cool. He plays a key role in the book I just finished writing (the third in this series) and he's just a darling.

Yes, Gabby knows he's attracted to her. She's attracted to him as well. But they were both seeing other people when they first met and he made it very clear that they could be friends or they could stay away from each other. They opted to become friends and that friendship came to mean a great deal to Gabby. Now that they're both single, she's not willing to risk losing Derek as a friend by crossing boundaries that he set.

Sure, now he's all of a sudden saying that they can have sex and still be friends but Gabby's viewpoint is that guys in lust will say anything to get laid! It's not that she distrusts him, it's just that she feels she's protecting their friendship.

No, I really wouldn't characterize Derek as possessive. He wants Gabby but he's been willing to wait her out, let her figure things out on her own--until Zach enters the picture. And, yes, at that point, Derek does what he can to sabotage things--but mostly because he's afraid he'll lose her forever if he doesn't step in and do something.

I'm so glad you asked! I never intended to write this book in first person. But once I heard Gabby's voice in my head, I knew I had to. She makes the story, in my opinion. I don't think I could have shown her personality anywhere near as well in third person. In fact I tried to re-write it in third person and I was completely dissatisfied with it.

And that's another reason I love Derek so much. Somehow, his personality manages to come across very, very clearly despite the fact that we're never in his point of view.

In Chapter One the reader meets Gabby and Derek. Gabby is late for her workout and Derek is majorly ticked. Gabby describes Derek to us as she sees him--his dark-chocolate voice, his classically perfect nose, and his lovely muscles. Right from the get go you’ve brought sexiness and physical attraction into the story. Is that important in a book like Waiting for the Big One?

I think so. I think it adds to the sexual tension between the main characters. I wanted it to be clear right away that these two were both very attracted to each other. They've both been waiting--for a sign, for the right time, for the other person to make the first move. And I wanted the readers to feel like they were waiting right along with them.

I’m going to move away from your book to talk about something that I feel very strongly about. There are groups out there who would seek to ban books like yours. How do you feel about that? Do you think censorship is ever justified?

I'm totally opposed to censorship of any kind. Not just because of what I write but because I think it's dangerous and just plain wrong for any group of people to decide that they should determine what someone else should or shouldn't be allowed to write or read or think or say.

Freedom of speech and freedom of the press are pretty damn important. Frankly, I'm appalled at all the recent attempts to dismantle the Constitution--for whatever reason. As Voltaire supposedly said, “I do not agree with what you have to say, but I’ll defend to the death your right to say it.”

I think the idea of censorship only serves to point out the extraordinary power inherent in writing. It's the whole 'the pen is mightier than the sword' kind of thing. Not that I'm writing the kind of thing that could topple empires--I'm absolutely not. I'm writing entertainment, pure and simple. But I believe everyone should have the freedom to decide--for themselves--what they're going to read or write or say or think.

Whew. Long answer, huh? What can I say? I live in Berkeley--we're all about the politics here.

Have you ever been approached by someone opposed to what you’ve written? How did you handle it? Do you have any advice for writers who might find themselves in the same boat as you?

I really haven't had that happen...unless you count rejections? lol! I've had plenty of those. But, you know, no one's ever going to write something that everyone's going to like, so I won't be surprised if it happens.

And, I hope that's something other writers will realize too. I mean, there are people who don't like Shakespeare! Or Hemingway, Faulkner, Dickens, Whitman--anyone. From the moment you put pen to paper, there are going to be people who won't like what you're writing. Who cares? You're not writing for those people anyway. Just don't let them stop you!

So, now that we’ve got all the fun stuff out of the way, how can people get their hands on a copy of Waiting for the Big One?

Well, I hope people will find that fun too. lol! Here's the very long URL:

People can also find links on my website http://www.pgforte.com/ Or by going to Liquid Silver's website at: http://www.liquidsilverbooks.com/

What’s up next for you? There are lots of works in progress listed on your website. Do you have any exciting news you would like to share with us?

Too many works in progress I sometimes think. I feel a little like the proverbial ditched centipede. At the moment I'm between books and not quite sure what I'm going to work on next. I think the most exciting news I have to share is that I've recently finished Let Me Count the Ways--which is the third book in the LA Love Lessons series. So readers who love Derek and want to see more of him can look forward to that.

I also want to let anyone interested in my Oberon series to know that I'm hoping to have them available again soon.

Well, I suppose I might mention that, for anyone who's enjoyed Waiting for the Big One and wants to read more about Zach, Love, From A to Z is also available now from Liquid Silver Books. I didn't really talk about him today, but he's another sweetheart.

Thanks for joining us today, PG. It’s been a great pleasure to chat with you. I wish you and your career all the best.

Thank you so much for having me! It's been great fun chatting with you. These were some fabulous questions.

This Virtual Book Tour brought to you by: